For the Love of Europe: My Favorite Places, People, and Stories (Paperback) 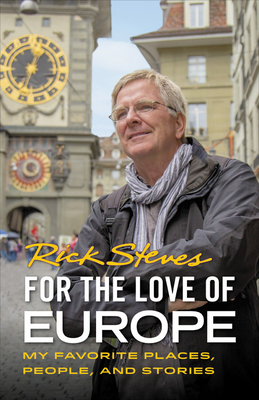 For the Love of Europe: My Favorite Places, People, and Stories (Paperback)

The shoulder seasons like October have always been a great month to travel in Europe for people whose children are grown and can fend for themselves.  Since I was a little girl, my most fond wish has always been to travel to Europe and eat the food and see the museums (drinking the beer and wine came later). For many years, thanks to Rick Steves' books, I have been able to meticulously plot any lucky trips that I have, even down to where I will walk until I collapse as late as possible on the day that always starts with that hellish overnight flight and ends with catatonic jet lag. Rick has taught me which advance tickets to get to save time, which Parisian cafes don't hate Americans, and which neighborhoods to see on foot. My sister and I--non churchgoers both--spent a whole day visiting Roman churches on foot, thanks to a tour in "Rick Steves Rome." And we spent an entire day on foot walking the city of Barcelona when the Catalan general strike of 2017 closed all museums and public transportation. Seventeen miles of sights that many tourists will never see, it turned into one of the best days of my life.  Steves and his co-authors are notably strong on Italy, Spain, and France, and perhaps less sympathetic (I think) to Germany and Switzerland. The pandemic has taught us many things, including don't put off  the travel that you have always wanted to take. This collection is a fun (and full color illustrated) collection of reflections from decades of travel. It's what I call a guest room library book as well. You don't have to read the essays in order.  As all of those October Facebook memories remind me of pre-COVID life, I'll be reading  to plot my return.

— From Carla's Picks (2013-2020)
After 40+ years of writing about Europe, Rick Steves has gathered 100 of his favorite memories together into one inspiring collection: For the Love of Europe: My Favorite Places, People, and Stories.
Join Rick as he's swept away by a fado singer in Lisbon, learns the dangers of falling in love with a gondolier in Venice, and savors a cheese course in the Loire Valley. Contemplate the mysteries of centuries-old stone circles in England, dangle from a cliff in the Swiss Alps, and hear a French farmer's defense of foie gras.
With a brand-new, original introduction from Rick reflecting on his decades of travel, For the Love of Europe features 100 of the best stories published throughout his career. Covering his adventures through England, France, Germany, Ireland, Italy, the Netherlands, Spain, and more, these are stories only Rick Steves could tell.
Wry, personal, and full of Rick's signature humor, For the Love of Europe is a fond and inspirational look at a lifetime of travel.

Since 1973, Rick Steves has spent about four months a year exploring Europe. His mission: to empower Americans to have European trips that are fun, affordable, and culturally broadening. Rick produces a best-selling guidebook series, a public television series, and a public radio show, and organizes small-group tours that take over 30,000 travelers to Europe annually. He does all of this with the help of more than 100 well-traveled staff members at Rick Steves' Europe in Edmonds, WA (near Seattle). When not on the road, Rick is active in his church and with advocacy groups focused on economic and social justice, drug policy reform, and ending hunger. To recharge, Rick plays piano, relaxes at his family cabin in the Cascade Mountains, and spends time with his son Andy and daughter Jackie. Find out more about Rick at www.ricksteves.com and on Facebook.
Connect with Rick:facebook.com/RickStevestwitter: @RickStevesinstagram: ricksteveseurope