A Funny Thing Happened on the Way to Stockholm: The Adrenaline-Fueled Adventures of an Accidental Scientist (Hardcover) 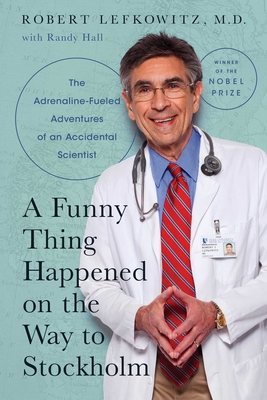 A Funny Thing Happened on the Way to Stockholm: The Adrenaline-Fueled Adventures of an Accidental Scientist (Hardcover)


On Our Shelves Now
The rollicking memoir from the cardiologist turned legendary scientist and winner of the Nobel Prize that revels in the joy of science and discovery.

Like Richard Feynman in the field of physics, Dr. Robert Lefkowitz is also known for being a larger-than-life character:  a not-immodest, often self-deprecating, always entertaining raconteur. Indeed, when he received the Nobel Prize, the press corps in Sweden covered him intensively, describing him as “the happiest Laureate.”

In addition to his time as a physician, from being a "yellow beret" in the public health corps with Dr. Anthony Fauci to his time as a cardiologist, and his extraordinary transition to biochemistry, which would lead to his Nobel Prize win, Dr. Lefkowitz has ignited passion and curiosity as a fabled mentor and teacher.

But it's all in a day's work, as Lefkowitz reveals in A Funny Thing Happened on the Way to Stockholm, which is filled to the brim with anecdotes and energy, and gives us a glimpse into the life of one of today's leading scientists.
Robert J. Lefkowitz is a Nobel Prize-winning scientist (Chemistry, 2012) who is best known for showing how adrenaline works via stimulation of specific receptors. He was trained at Columbia, the NIH and Harvard before joining the faculty at Duke University and becoming an Investigator of the Howard Hughes Medical Institute. In addition to being a researcher, Dr. Lefkowitz is a cardiologist as well as a cardiac patient.

Randy Hall was a post-doctoral trainee of Dr. Lefkowitz in the 1990’s and is now a Professor in the Emory University School of Medicine. He has published more than one hundred scientific papers and received major awards for his research. He is also a prize-winning educator with strong interests in science writing and public outreach about science and medicine.
"Cardiologist-turned-biochemist, Robert Lefkowitz won the 2012 Nobel Prize in Chemistry for showing how adrenaline works through stimulation of specific receptors, with huge implications for drug discovery. Yet he calls himself 'an accidental scientist,' because he trained as a physician. Instead of being drafted to the Vietnam War, he served at the US National Institutes of Health. His autobiography is a vividly anecdotal account, influenced by a supervisor’s lesson that data do not tell a story: 'A story is something you impose on the data.'"
— Andrew Robinson

“Lefkowitz unveils the teamwork, persistence, and labors of love that go into living a life of significance.  By turns funny and moving, this book has the power to inspire.”
— Mike Krzyzewski, Head Coach, Men’s Basketball, Duke University

"This vivid tale shines with personality. Rarely has science been treated with such a winning blend of humor and humanity."
— Publishers Weekly

"Lefkowitz is an avid and inveterate storyteller. Told with humor and humility, what shines through most is his love of stories. His passion for science and discovery, for helping people, and for celebrating stories is infectious."
— Booklist

“An engaging Nobel Prize-winning journey of a life in medicine and science.  Joyous, insightful, and irreverent, Lefkowitz describes the enormous impediments to challenging established dogma and legendary elders as well as the art and satisfaction of mentoring young scientists.  For both lay readers and professional scientists, this book presents a narrative that will delight and that offers a goldmine of wisdom.”
— Robert Horvitz, Ph.D., Massachusetts Institute of Technology, Investigator of the Howard Hughes Medical Institute; Nobel Prize in Physiology or Medicine (2002)

“Lefkowitz’s life is testament to the joy of science. The book is a page-turner, a riveting account of a life well-lived.  It is a story of stories, a tale of greatness.”
— Roger D. Kornberg, Ph.D., Stanford University, Nobel Prize in Chemistry (2006)

“In this engaging and often rollicking tale, Bob Lefkowitz recounts how the Vietnam War transformed him from a dedicated young physician into an enthusiastic, ambitious, and highly successful scientist whose discoveries have altered our understanding of cell function and approaches to drug development.  Arriving at a time when the need to convert physicians into scientists is greater than ever, this book can do more than just entertain and instruct: it can inspire young doctors to remake their careers.”
— Harold Varmus, M.D., Lewis Thomas University Professor, Weill Cornell Medicine; Nobel Prize in Physiology or Medicine (1989); Author of The Art and Politics of Science

“More than just a heartwarming and thrilling chronicle of a great physician-scientist, Lefkowitz has written a story-based leadership guide for any aspiring mentor. A testament to the power of building enduring excellence by believing in, championing, and developing others.”
— Sanyin Siang, Leadership Coach and author of The Launch Book

“A spell-binding memoir, packed with deep insights and charged with the thrill of discovery. This is a tale told from the pinnacle of human achievement, that also serves as a master-class in humility and overcoming tragedy—all interwoven with laugh-out-loud anecdotes. Lefkowitz is a brilliant and charming storyteller, with an indomitable passion for living, and wisdom for the ages.”
— Karl Deisseroth, M.D., Ph.D., Stanford University, Winner of the Kyoto Prize and the Heineken Prize; Author of Projections

“In this entertaining book, Nobelist Bob Lefkowitz recounts how he became a passionate and renowned physician-scientist. He unveils the secret to his scientific stardom in a series of engrossing stories spanning his fifty-year career. No tale is left untold—many are amusing, some might raise a few eyebrows.”
— Joseph L. Goldstein, M.D., and Michael S. Brown, M.D., U.T. Southwestern Medical Center, Nobel Prizes in Physiology or Medicine (1985)

“How does a brilliant young physician accidentally get hooked on research? Bob Lefkowitz's life-altering shift changed not only his life but the lives of hundreds of his trainees. From the dazzling way adrenaline controls critical body functions to the thrill of his Nobel Prize win, this engaging book will help you better understand how physician scientists dedicate their careers to understanding human biology and enhancing human health."
— P. Roy Vagelos, M.D., Retired Chairman and CEO, Merck & Co.; Chairman of the Board, Regeneron Pharmaceuticals

“Lighthearted, yet profoundly personal and moving, Lefkowitz’s memoir shares the secret recipe for winning a Nobel prize—two parts genius, one part audacity in challenging authority, one part insightful and supportive mentoring, a splash of good luck, and ten parts resilience and persistence. Bob Lefkowitz is at the top of the list of the extraordinary cadre of physicians turned scientists who ushered in the modern biotechnology revolution.”
— Barry S. Coller, M.D., David Rockefeller Professor of Medicine, Rockefeller University, Physician-in Chief, Rockefeller University Hospital

"The odds of a scrappy kid growing up in the Bronx winning a Nobel Prize are overwhelmingly small.  How Bob Lefkowitz managed to do this is revealed in this delightfully rich and moving book allowing the reader to understand Bob’s intelligence, warmth, and complexity.  If you read one book this year, choose this one.  It will fill you with joy, hope, and give you a new friend.”
— Ralph Snyderman, M.D., Professor of Medicine, Chancellor Emeritus, Duke University

“A blend of comedy, history, and tragedy, this book is much more than a delightfully amusing tale of a bright kid from the Bronx who ultimately wins a Nobel Prize. Bob Lefkowitz’s message is of the utmost importance. U.S. taxpayer dollars funded a unique cadre of young physicians—'the Yellow Berets’—whose discoveries have led to revolutionary therapies for heart disease, cancer, diabetes, impotence, neurodegeneration, HIV, and coronavirus, all while training the next generation of medical scientists. Reading this book shows that investments in science will continue to save the world.”
— Peter Agre, M.D., Professor and Director, Johns Hopkins Malaria Research Institute, Bloomberg School of Public Health; Nobel Prize in Chemistry (2003)

“Robert Lefkowitz’s memoir is a rollicking, absorbing read. It turns out many funny things happened on his way to Stockholm. Beautifully written, this book demonstrates the importance of humor, humility, and humanity in the pursuit of scientific discovery."
— Jerry Speyer, Chairman, Tishman-Speyer

"A deeply personal perspective of events, people, thoughts, and actions that have created an era of major scientific breakthroughs.  Full of insights and revelations about the milieu that underlies today’s biomedical revolution, from a key participant.  Written with a candor and style that make Bob Lefkowitz’s life adventures as a physician-scientist a delight to read.”
— Stanley N. Cohen, M.D., Professor of Genetics and Medicine, Stanford University

“Bob Lefkowitz is a legend in his own time. In addition to his clinical background as an MD and acknowledged scientific mettle resulting in a Nobel Prize, he is a renowned raconteur. Bob also has an excellent sense of humor, and these twin skills have made him a highly sought-after public speaker. They are both on vivid display in this highly readable and entertaining autobiography, which begins with his childhood in the Bronx and embraces his long and distinguished career.”
— Michael Rosbash, Ph.D., Peter Gruber Professor of Neuroscience, Brandeis University, Investigator of the Howard Hughes Medical Institute

“Lefkowitz is not only a gifted scientist, but also a gifted story-teller. From the Yankees to Duke basketball to the game show Jeopardy through the upper echelons of science on his way to a Nobel Prize, he proves that science can be fun and rewarding for himself, the field, and his patients."
— Brian Druker, M.D., Director, Knight Cancer Institute, Oregon Health & Science University

“Lefkowitz appreciates the power of storytelling, both at the bedside in making diagnoses and at the bench in generating hypotheses. Full of vignettes that are sometimes embarrassingly honest, at other times laugh-out-loud humorous, but always infused with his own special brew of humility and hubris. An informative and entertaining read.”
— Helen H. Hobbs, Investigator, Howard Hughes Medical Institute, University of Texas Southwestern Medical Center

“A tribute to teamwork that aims to inspire the young generation of scientists to take a similar journey.  This book shows that making a breakthrough discovery, changing a paradigm, and using science as a tool to change people’s lives is possible, while also emphasizing that such achievements are not made by angels but by human beings like all of us.”
— Aaron Ciechanover, M.D., D.Sc., Technion, Israel Institute of Technology, Nobel Prize in Chemistry (2004)