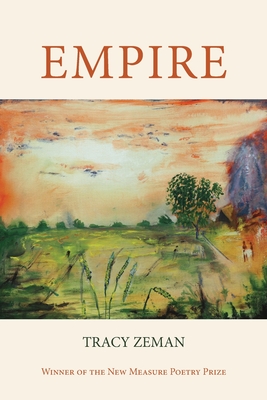 WHAT PEOPLE ARE SAYING

Unusually attuned to traces of habitats and traditions effaced by settler colonialism, Tracy Zeman takes readers into the field beyond the "weedy plutocracy of parceled plots" laid out by an expanding empire. Zeman insists on the persistent presence of grassland ecologies and indigenous cultures as a way of "fixing the outside within the frame," a subversion of settler culture's ecocidal and genocidal frameworks. Empire's Objectivist method of splicing lyric language with research and quotation collapses past and present, archive and song, allowing us to see Manifest Destiny as a continuous project of violent erasure that depends upon perpetual forgetting for its continuation. Zeman refuses to forget. --Brian Teare, author of Doomstead Days

In language as beautiful and efficacious as the "eight spear-heads / within a mammoth rib-cage," Tracy Zeman's Empire returns us to our continent, both the deep-rooted complexity of her native prairies and the deep-rooted losses we inhabit so casually. When I seek in these poems "the marker between / the human and all else," I find it not in the grave goods and death-remembrance that punctuate an otherwise "natural" world, but in the poetic voice itself, its ecology of sensing and of knowing. . . . These are steady, unheroic acts of attention, seeking human survival not in some vain hope of historical rescue but as a clear-sighted consciousness already achieved by the poems. --Susan Tichy, author of The Avalanche Path in Summer

Empire is a song for what's lost, and all that remains. Zeman wanders the disappeared Great Plains and the Pacific Coast--the center and boundary of a culture that saw itself as destined to subdue a continent. With a naturalist's eye and a poet's ear, she gathers fragments of observation and memory, history, texts, names of disappeared and common species--all unmoored from their origins and rewoven into a haunting, lyrical whole. Like rocks, or rivers, distant pasts and futures flow through this work. It insists on the complexity of mourning and love that is the Anthropocene. "I measure every grief I meet" she writes, "in this broken unbroken place." --Allison Cobb, author of Green-Wood

TRACY ZEMAN'S poems have appeared in Beloit Poetry Journal, Chicago Review, TYPO and other journals, and her book reviews have been published in Kenyon Review Online and Colorado Review. She has earned residencies from the Sitka Center for Art and Ecology, Ox-Bow, and The Wild. She lives outside Detroit, Michigan, with her husband and daughter. Empire is her first full-length collection.