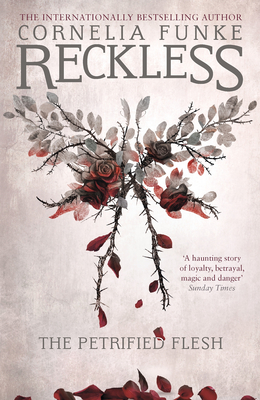 This is book number 1 in the Mirrorworld Series series.

Enter the magical world behind the Mirrors... the thrilling first instalment in the Reckless series by renowned, bestselling author Cornelia Funke.

Jacob has uncovered the doorway to another world, hidden behind a mirror. It is a place of dark magic and enchanted objects, scheming dwarves and fearsome ogres, fairies born from water and men born from stone.

Here, he hunts for treasure and seeks adventure in the company of Fox - a beautiful, shape­shifting girl, who guides and guards him.

But now Jacob's younger brother has followed him into the mirrored world, and all that was freedom has turned to fear. Because a deadly curse has been spoken; and Jacob must risk his life to reverse it, before his brother is turned to stone forever...

Revised and updated by Cornelia Funke, The Petrified Flesh is the first book in the thrilling Reckless series.
Cornelia Funke is the highly acclaimed, award-winning and bestselling author of the Inkheart trilogy, Dragon Rider, The Thief Lord and numerous other children's novels and picture books. Born in 1958 in the German town of Dorsten, she worked as a social worker for a few years before turning first to illustration and then to writing. Her books have now sold more than 20 million copies worldwide, and have been translated into 37 languages.
"A haunting story of loyalty, betrayal, magic and danger" Sunday Times
"Magical and full of surprises - find a child to read it to as an excuse, or just indulge" The Lady
"A superb series of books. They are certainly intriguing and mesmerising in the telling" The School Librarian