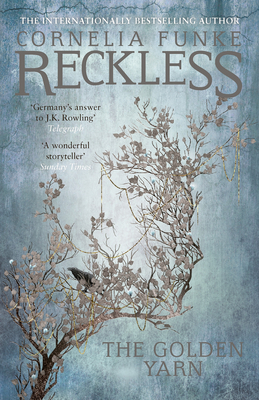 This is book number 3 in the Mirrorworld Series series.

The worlds on either side of the mirror are about to collide. And there's nothing Jacob can do to stop them.

After a perilous encounter with an Alder Elf - an immortal, trick-­turning creature to whom he owes a great debt - Jacob must journey back into the enchanted Mirrorworld once again.

Together with Fox, his beautiful shape­shifting friend, Jacob has no choice but to follow his brother on the trail of the Dark Fairy, who has fled deep into the East: to a land of folklore, Cossacks, spies, time­-eating witches and flying carpets. But what exactly is the Dark One running from? Could it be the same danger that threatens Jacob and Fox?

The third book in the Reckless series, The Golden Yarn is a thrilling tale of courage and fear, jealousy and forbidden desire; in which love has the power both to save a life - and to destroy it.
Cornelia Funke is the highly acclaimed, award-winning and bestselling author of the Reckless series, the Inkheart trilogy, Dragon Rider, The Thief Lord and numerous other children's novels and picture books. Born in 1958 in the German town of Dorsten, she worked as a social worker for a few years before turning first to illustration and then to writing. Her books have now sold more than 20 million copies worldwide, and have been translated into 37 languages.
"A nostalgic fantasy, playing with the conventions of Russian fairy tale" Telegraph, Books of the Year
"A wonderful storyteller" Sunday Times