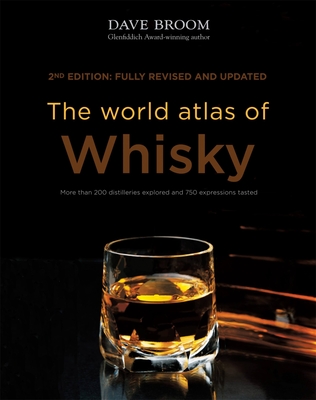 
Usually Available in 2-5 Days
This new, fully updated edition of The World Atlas of Whisky provides an in-depth, comprehensive journey through the history, process, distilleries and expressions of world whiskies

"The best whisky book ever - a must-read for drinkers!" - Forbes

Award-winning author and whisky expert Dave Broom explores over 200 distilleries and examines over 400 expressions. Detailed descriptions of the Scottish distilleries can be found here, while Ireland, Japan, the USA, Canada and the rest of the world are given exhaustive coverage. There are tasting notes on single malts from Aberfeldy to Tormore, Yoichi (and coverage of the best of the blends). Six specially created 'Flavor Camp Charts' group whiskies by style and allow readers to identify new whiskies from around the world to try.

This extensively updated and extended edition features new material on burgeoning areas, including detailed coverage of many recently opened US craft distilleries, new distilleries in Germany, Austria and Switzerland, and discussion of the growing whisky scene in Latin America.

With over 200 beautiful color photographs and 21 color maps locating distilleries and whisky-related sites, this is a stylish celebration of the heritage, romance, craftsmanship and versatility of whisky.
Award-winning author and whisky expert Dave Broom has been writing about whisky for 20 years as a journalist and author. He has written eight books, two of which, Drink! and Rum, won the Glenfiddich Award for Drinks Book of the Year. He has also won the Glenfiddich Drinks Writer of the Year twice. Dave is editor of the Scotch Whisky review, editor-in-chief of Whisky Magazine: Japan, consultant editor to Whisky Magazine (UK, the USA, France, Spain) and a regular contributor to a raft of national and international titles including the Spectator, Daily Telegraph, Mixology and Imbibe (Europe). A regular broadcaster on TV and radio, he was elected the IWSC Communicator of the Year in 2013.

Simply the best book ever written on whisky . . . the most helpful info any whisky fan who is not a world-class expert like Broom can get.—Larry Olmsted, Forbes.com

Makes a powerful and evocative case for geography as an organizing principle for understanding whiskey in its world.—Eric Asimov, The New York Times