Shores Beyond Shores: From Holocaust to Hope, My True Story (Paperback) 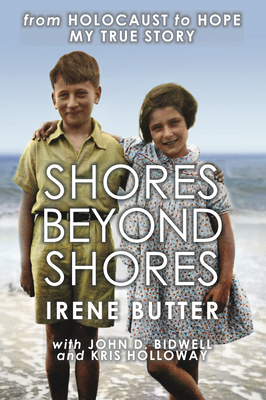 Shores Beyond Shores: From Holocaust to Hope, My True Story (Paperback)

Irene's first person Holocaust memoir, Shores Beyond Shores, is an account of how the heart keeps its common humanity in the most inhumane and turbulent of times.

Irene's childhood is cut short when she and her family are deported to Nazi-controlled prison camps and finally Bergen-Belsen, where she is a fellow prisoner with Anne Frank. Later forbidden from speaking about her experiences by the American relatives who cared for her, Irene is now making up for lost time. Irene has shared the stage with peacemakers such as the Dalai Lama, Desmond Tutu, and Elie Wiesel, and she considers it her duty to tell her story now and on behalf of the six million other Jews who have been permanently silenced.

Book long description:
Irene Butter's memoir of her experiences before, during and after the Holocaust is not a recounting of misery and tragedy; rather it is the genuine story of a girl coming to terms with a terrible event and choosing to view herself as a survivor instead of a victim. When the Dutch police knock on their door, Irene and her family are forced to leave their home and board trains meant for cattle. They are taken to Nazi-controlled prison camps and finally to Bergen-Belsen, where Irene is a fellow prisoner with Anne Frank. With limited access to food, shelter, and warm clothing, Irene's family needs nothing short of a miracle to survive. Irene's memoir tells the story of her experiences as a young girl before, during, and after the Holocaust, highlighting how her family came to terms with the catastrophe and how she, over time, came to view herself as a survivor rather than a victim. Throughout the book, her first-person account celebrates the love and empathy that can persist even in the most inhumane conditions.

Irene's words send a poignant message against hate at a time when anti-Semitic, fascist and xenophobic movements around the globe are experiencing a resurgence. Irene, through her book, reminds us of the impact one person can have in choosing to follow the mantra, 'never a bystander' -- a phrase she adopted only 33 years ago, after her own voice was silenced by her cousins in the years after the Holocaust. Now, Irene Hasenberg Butter is a well-known inspirational speaker on her experiences during World War II.