The Book of Frank (Paperback) 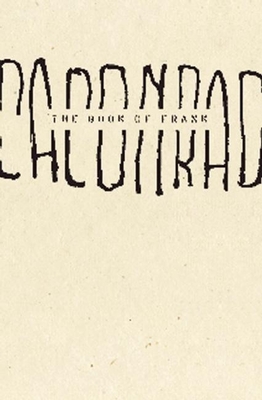 Winner of the 2009 Gil Ott Book Award, this expanded edition of The Book of Frank features additional Frank poems and an essay by Eileen Myles. Praised by poet Anne Waldman as a voyeuresque surreal portrait, The Book of Frank is also, in the words of poet-critic Alan Gilbert, a "candid portrayal of human cruelty and its resultant fantasies of escape.

CAConrad is the author of The Book of Frank (Wave Books, 2010/Chax Press, 2009). He is also the author of Advanced Elvis Course (Soft Skull Press, 2009), (Soma)tic Midge (Faux Press, 2008), Deviant Propulsion (Soft Skull Press, 2006), and a collaboration with poet Frank Sherlock titled The City Real and Imagined (Factory School, 2010). The son of white trash asphyxiation, his childhood included selling cut flowers along the highway for his mother and helping her shoplift. In 2011, he was awarded a Pew Fellowship by the Pew Center for Arts & Heritage.

"The poems capture moments, and they don’t explain themselves. But, cumulatively, they invoke a sense of what it is like to be almost supernaturally sensitive, empathic, curious, responsive. In short: what it feels like to be a poet, possessed by a muse." Charles Kruger, The Rumpus

"I’ve grown to love CA Conradthe man, the work, and all he attempts and representsbecause he always argues (from the inside of his poems) for a poetry of radical inclusivity while keeping a very queer shoulder to the wheel. His kind of queerness strikes me as nonpolarizing, not intentionally but because of the fullness of his exposition, a kind of gigantism that seems to me to be most deeply informed by love, and a tenderness for the ravages and tumult of existence." Eileen Myles

"At once charming and frightening, The Book of Frank will certainly take the top of your head off, and it might just replace it with something better." Noah Eli Gordon, Boston Review

"Conrad's approach is a welcome change from high-minded poetry that steadfastly ignores the body in all its dumb, limiting materiality...Only by engaging this body, by forcing ourselves to travel through the shames and humiliations of its portals, can we achieve transport." Christopher Schmidt, BookForum