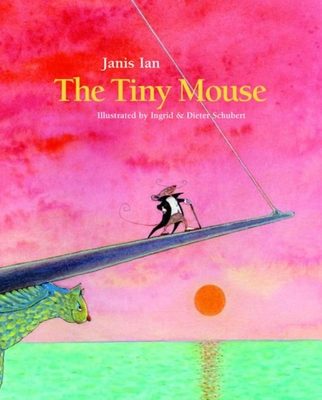 
On Our Shelves Now
A songwriter since she wrote Society's Child at the age of 14 and a Grammy winner for At Seventeen, Janis Ian's charming and witty song has now become a picture book illustrated by Ingrid and Dieter Schubert. Janis wrote The Tiny Mouse for The Boat Project - a collaborative endeavor for which people donated wood, stories and songs that were made into a fantastical thirty-foot vessel that was part of the London's Olympics. The Tiny Mouse follows the adventures of a bored mouse who decides to go to sea and narrowly escapes a grisly death. In his moment of truth, he understands that it's better to be a whole mouse at home than someone's dinner at sea. This book and CD set has not only Janis Ian singing The Tiny Mouse with a full band but also a version without vocals for singalong fun. A complete transcription for piano and guitar is also included. Ingrid & Dieter Schubert, creators of The Umbrella and many other picture books, give the tiny mouse his dapper and affable appearance and bring his perilous adventures to life with plenty of sly humor.
JANIS IAN (1951) is songwriter, performer, and author with 9 Grammy nominations. Her songs "At Seventeen" and "Society's Child" are in the Grammy Hall Of Fame. Her autobiography, Society's Child, received starred reviews for both the book and the audiobook from Booklist in addition to a Grammy win for Best Spoken Word Audio.

INGRID (1953) and DIETER (1947) SCHUBERT were born in Germany. After the Academy of Design in Munster and the Academy of Art in Dusseldorf they went to the Gerrit Rietveld Academy in Amsterdam. Their many books for children are available in 21 languages. Their work has been exhibited all over the world.This illustrating couple is extremely popular with parents and children alike because of their skill in watercolours and keen eye for witty detail.