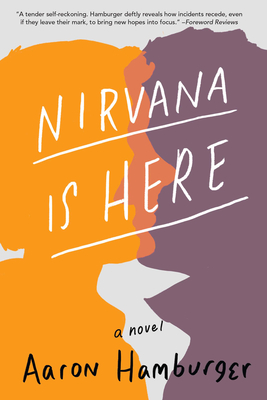 
Usually Available in 2-5 Days
WINNER, BRONZE MEDAL, FOREWORD REVIEWS 2019 INDIE AWARD For Best LGBTQ+ Fiction
For Ari Silverman, the past has never really passed. After 20 years, the trauma from a childhood assault resurfaces as he grapples with the fate of his ex-husband, a colleague accused of sexually harassing a student. To gain perspective, Ari arranges to reconnect with his high school crush, Justin Jackson, a bold step which forces him to reflect on their relationship in the segregated suburbs of Detroit during the 1990s and the secrets they still share. An honest story about recovery and coping with both past and present, framed by the meteoric rise and fall of the band Nirvana and the wide-reaching scope of the #metoo movement, Nirvana is Here explores issues of identity, race, sex, and family with both poignancy and unexpected humor. Deftly told intertwining stories with rich, real characters are reminiscent of the sensuality and haunting nostalgia of Andr Aciman's Call Me By Your Name blended with the raw emotion of Kurt Cobain's lyrics. Written by award-winning writer Aaron Hamburger, Nirvana Is Here is "a wonder of a book," according to acclaimed novelist Lauren Grodstein (Our Short History). "As a Jewish Gen-Xer, the novel reminded me exactly of who I once was--and all that I still want to be. . . . a brilliant accomplishment.
Aaron Hamburger is the author of a story collection titled The View from Stalin's Head (Random House), winner of the Rome Prize from the American Academy of Arts and Letters. His second book, the novel Faith for Beginners (Random House), was nominated for a Lambda Literary Award. His writing has appeared in The New York Times, The Washington Post, The Chicago Tribune, O, the Oprah Magazine, Details, The Village Voice, Poets & Writers, Tin House, Out, Michigan Quarterly Review, The Forward and numerous other publications. In addition, he has also won fellowships from Yaddo, Djerassi, the Civitella Ranieri Foundation, and the Edward F. Albee Foundation as well as first prize in the Dornstein Contest for Young Jewish Writers. He has taught creative writing at Columbia University, the George Washington University, New York University, Brooklyn College, and the Stonecoast MFA Program. He currently resides in Washington, D.C