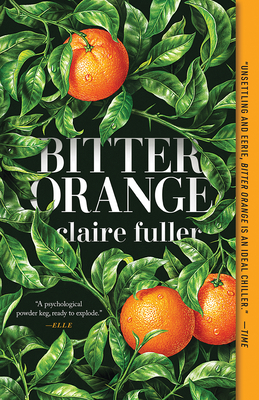 “What I look forward to most in Claire Fuller’s writing is the deliberate unfolding of plot and character, the careful chemistry that crackles when characters observe one another and reader observes narrator. Bitter Orange is Fuller’s most mysterious novel yet, a house haunted by the stories its characters tell of their pasts and the slow unraveling of the truth. Dark and twisty and full of secrets, Bitter Orange is a satisfying page-turner perfect for readers who like a spooky and psychological read.”
— Kelsey O'Rourke, Literati Bookstore, Ann Arbor, MI

What I look forward to most in Claire Fuller’s writing is the deliberate unfolding of plot and character, the careful chemistry that crackles when characters observe one another and reader observes narrator. Bitter Orange is Fuller’s most mysterious novel yet, a house haunted by the stories its characters tell of their pasts and the slow unraveling of the truth. Dark and twisty and full of secrets, Bitter Orange is a satisfying page-turner perfect for readers who like a spooky and psychological read.

An NPR Best Book of the Year

From the author of Our Endless Numbered Days and Swimming Lessons, Bitter Orange is a seductive psychological portrait, a keyhole into the dangers of longing and how far a woman might go to escape her past.

From the attic of Lyntons, a dilapidated English country mansion, Frances Jellico sees them—Cara first: dark and beautiful, then Peter: striking and serious. The couple is spending the summer of 1969 in the rooms below hers while Frances is researching the architecture in the surrounding gardens. But she’s distracted. Beneath a floorboard in her bathroom, she finds a peephole that gives her access to her neighbors' private lives. To Frances’s surprise, Cara and Peter are keen to get to know her. It is the first occasion she has had anybody to call a friend, and before long they are spending every day together: eating lavish dinners, drinking bottle after bottle of wine, and smoking cigarettes until the ash piles up on the crumbling furniture. Frances is dazzled. But as the hot summer rolls lazily on, it becomes clear that not everything is right between Cara and Peter. The stories that Cara tells don’t quite add up, and as Frances becomes increasingly entangled in the lives of the glamorous, hedonistic couple, the boundaries between truth and lies, right and wrong, begin to blur. Amid the decadence, a small crime brings on a bigger one: a crime so terrible that it will brand their lives forever.

Claire Fuller was born in Oxfordshire, England. She has written three novels: Our Endless Numbered Days, which won the Desmond Elliott Prize; Swimming Lessons; and Bitter Orange. She has an MA in Creative and Critical Writing from the University of Winchester and lives in Hampshire with her husband.

Fuller, a skilled stylist, is very good at letting you know Frances by degrees and at describing a setting in which the ordinary rules of life feel suspended . . . You can taste the wine, smell the musty fabrics and the overripe fruit, hear the hum of lazy insects and track the teasing suggesting that something will go terribly wrong.
— The New York Times Book Review

Bitter Orange twists and bends, arouses and agitates, like a seductive nightmare. . . . With sensations so alive on the page, you’re constantly kept on your toes, attuned to the mania. You’ll ask, beguiled: What’s really going on here?

In her finely crafted psychological thriller Bitter Orange, the devilish novelist gives us a sunny, summery, open backdrop that nevertheless becomes a vise tightening around the throats of both the main character and the reader. Formula and genre can themselves be as suffocating as a coffin, but in such capable hands they become freeing, reinvigorated, and compelling.

Page by page, Fuller enchants us with prose as thick as clotted cream, only for us to realize too late that she’s been ensnaring us at every turn.
— The Paris Review

Lovely and lush prose that only adds to the sense of dread pervading the novel . . . Bitter Orange is an absorbing exploration of the many lies we tell to others—and to ourselves.

English mansion? Check. Dazzling couple? Check. Yearning outsider? Now you have all the ingredients for a psychological powder keg, ready to explode during the summer of ’69.
— Elle, Most Anticipated Books of Fall

Fuller is a master of the quietly eerie; she’s excellent at creating an aura of pervasive dread—and sustaining it till the very last page.
— NYLON, Best Books of Fall

Cannily releasing clues on the way to an explosive finale, Fuller moves fluidly between the time of the story and a period 20 years later . . . The lush setting and remarkable characters make for an immersive mystery.
— Publishers Weekly

In the vein of Shirley Jackson's bone-chilling The Haunting of Hill House, Fuller's disturbing novel will entrap readers in its twisty narrative, leaving them to reckon with what is real and what is unreal. An intoxicating, unsettling masterpiece.

Fuller is a master of propulsive action, making the ground spin as each unreliable narrator takes center stage. Every measured sentence builds on itself with the crumbling estate providing the saturated backdrop for this ultimately macabre tale. Bitter Orange offers a gripping and unsettling look at the ugly side of extreme need and the desperate measures taken in the name of love.

A literary mystery that fans of Sarah Waters, Daphne Du Maurier, and Shirley Jackson won’t want to miss. . . . This high intrigue, along with the inherent eeriness of the setting, makes Bitter Orange a perfect fall read.

Like Daphne du Maurier's Rebecca, Bitter Orange sings, enchants, haunts. If not for Claire Fuller's stunning language and mastery of control, I'd have succumbed to the temptation to blaze through these pages just to see how the suspense resolves. A beautiful novel.

— Daniel Magariel, author of One of the Boys

A rich, dark pressure cooker of a novel that simmers with slow heat and suppressed tension.
— Ruth Ware, New York Times bestselling author of The Woman in Cabin 10

Claire Fuller is such an elegant writer and this book is incredibly atmospheric, vivid, and intriguing. I had to keep reminding myself that I wasn't reading a forgotten classic.
— Emma Healey, author of Elizabeth Is Missing