How to Be Normal: Essays (Hardcover) 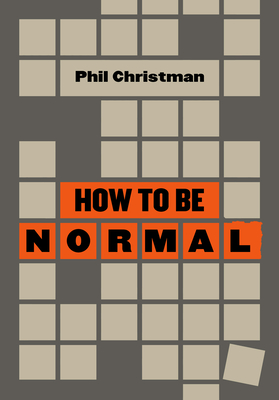 How to Be Normal: Essays (Hardcover)


On Our Shelves Now
Phil Christman is one of the best cultural critics working today. Or, as a reviewer of his previous book, Midwest Futures, put it, "one of the most underappreciated writers of his] generation."

You may also know Phil from his columns in Commonweal and Plough, or his viral essay "What Is It Like To Be A Man?", the latter adapted in his new book, How to Be Normal.

Christman's second book includes essays on "How To Be White," "How to Be Religious," "How To Be Married," and more, in addition to new versions of the above. Find in it also brilliant analyses of middlebrow culture, bad movies, Mark Fisher, Christian fundamentalism, and more.

With exquisite attention to syntax and prose, the astoundingly well-read Christman pairs a deceptively breezy style with radical openness. In his witty, original hands, seemingly "normal" subjects are rendered exceptional, and exceptionally.

Phil Christman is the author of Midwest Futures, winner of both the Independent Publisher Book Award and a Midwest Independent Publisher Award. He currently lectures in the English department at University of Michigan. His work has appeared in The Hedgehog Review, Commonweal, The Christian Century, The Outline, and other places. He lives in Ann Arbor, MI.