Together We Will Go (Hardcover) 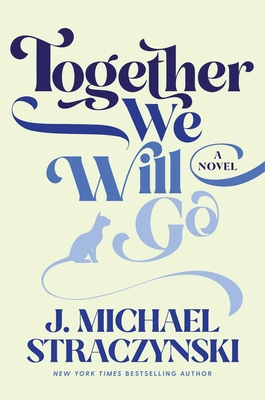 Together We Will Go (Hardcover)


On Our Shelves Now
The Breakfast Club meets The Silver Linings Playbook in this powerful, provocative, and heartfelt novel about twelve endearing strangers who come together to make the most of their final days, from New York Times bestselling and award-winning author J. Michael Straczynski.

Mark Antonelli, a failed young writer looking down the barrel at thirty, is planning a cross-country road trip. He buys a beat-up old tour bus. He hires a young army vet to drive it. He puts out an ad for others to join him along the way. But this will be a road trip like no other: His passengers are all fellow disheartened souls who have decided that this will be their final journey—upon arrival in San Francisco, they will find a cliff with an amazing view of the ocean at sunset, hit the gas, and drive out of this world.

The unlikely companions include a young woman with a chronic pain sensory disorder and another who was relentlessly bullied at school for her size; a bipolar, party-loving neo-hippie; a gentle coder with a literal hole in his heart and blue skin; and a poet dreaming of a better world beyond this one. We get to know them through access to their texts, emails, voicemails, and the daily journal entries they write as the price of admission for this trip.

By turns tragic, funny, quirky, charming, and deeply moving, Together We Will Go explores the decisions that brings these characters together, and the relationships that grow between them, with some discovering love and affection for the first time. But as they cross state lines and complications to the initial plan arise, it becomes clear that this is a novel as much about the will to live as the choice to end it. The final, unforgettable moments as they hurtle toward the decisions awaiting them will be remembered for a lifetime.
J. Michael Straczynski has written hundreds of hours of television, major motion pictures and graphic novels. He is the widely acclaimed creator of Babylon 5, cocreator of Netflix’s Sense8, and writer for Clint Eastwood’s Changeling, which earned him a nomination for a British Academy Award for Best Screenplay (BAFTA). His work has frequently appeared on the New York Times bestseller list, and his extensive list of awards includes the Hugo Award, the Ray Bradbury Award, the Eisner Award, and the GLAAD Media Award. He lives in California.
“J. Michael Straczynski…challenges form and function and presents the meaning of life in a new, original way.” —Good Morning America’s “33 Books to Heat Up Your July”

“A listless, apathetic young man decides to charter a bus across the country, picking up like-minded cynics along the way to a final destination: death….Acclaimed creator Straczynski manages to strike a note that's lighthearted, peculiar, poignant, and profound all at once.” —Newsweek’s “21 Enticing Books to Take Along this Summer”

“Satisfying...a 21st-century epistolary novel...Together We Will Go is, in the end, about friendship and learning to love.” —BookPage

"Sad, thoughtful and humane, filled with vivid characters, Together we Will Go is a hymn to life and a meditation on suffering." —Catriona Ward, bestselling author of The Last House on Needless Street