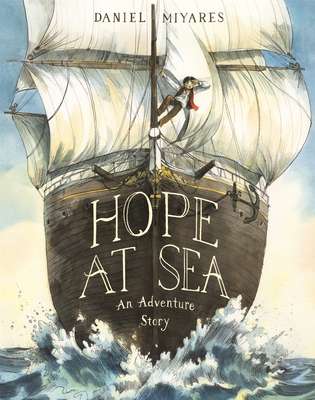 
Usually Available in 2-5 Days
Hope doesn’t only want to listen to her father’s stories about his voyages at sea, she wants to be part of those stories.

And so, unbeknownst to her parents, she stows away on her father's 19th-century merchant vessel. But look... The wind has picked up and the sky is darkening...

Could there be such a thing as an adventure that is too exciting?

Join high-spirited Hope on a trip of a lifetime in this exquisitely illustrated picture book that also captures the love between a father and child.
Daniel Miyares is the critically acclaimed author-illustrator of NIGHT OUT, which was called a "pleasure" by Publishers Weekly in a starred review, and FLOAT, which the Boston Globe called a "perfect wordless picture book." He is also the illustrator of NIGHT WALK TO THE SEA, written by Deborah Wiles, described as "majestic" by Bulletin Center for Children's Books, and THAT IS MY DREAM! a picture book version of Langston Hughes' "Dream Variation," hailed as "a must-read" by Kirkus in a starred review. He lives in Kansas with his family. Visit him on the Web at danielmiyares.com or follow him on Twitter at @danielmiyares or on Instagram at @danielmiyaresdoodles.
Praise for That is My Dream!:

"With luminous washes of watercolor and the lyrical language of Hughes’s 1924 poem as his text, Miyares (That Neighbor Kid) presents a resonant vision of an African-American boy who imagines a more just world." —Publishers Weekly, starred review