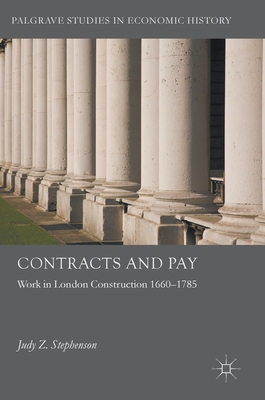 This book presents a new economic history of London construction in the early modern period. Drawing on extensive archival material from key sites such as St Paul's Cathedral and London Bridge, it describes the organisation of contracts and work on large-scale 'extraordinary' projects and maintenance contracts in the city during a key period of architectural and organisational development in Britain. Stephenson shows that the organisation of the industry and the welfare of its workers were shaped by the contracts and finance of large institutions and ambitious businessmen. Providing fresh wage and earnings data for craftsmen and labourers during the period, it offers new material and debate for economic, business and construction historians.

Judy Z. Stephenson is Fellow of Wadham College Oxford, UK, and an economic historian of labour markets, organisations and employment in early modern England. She has worked with the Cambridge Group for the History of Population and Social Structure, UK, and was formerly an Economic History Society Tawney Fellow.