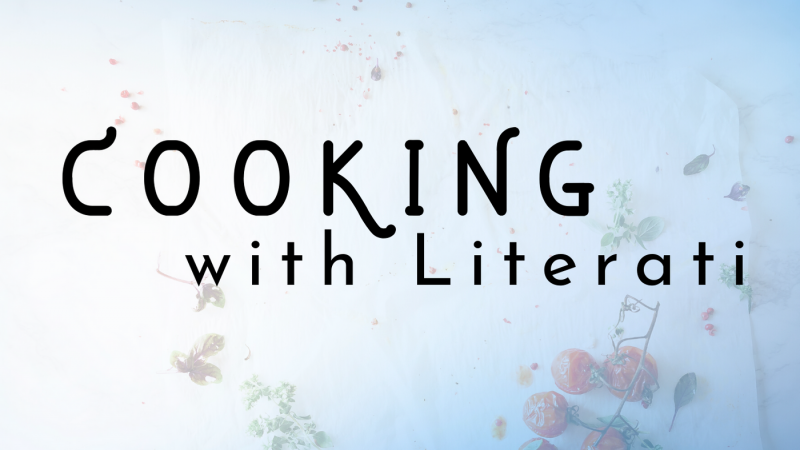 The current events of the world have created many unexpected ripple effects. One of the more positive changes has been the sharp spike in home cooks looking for recipes to wow and comfort. With a truly extensive collection of cookbooks out in the world, we at Literati wanted to use our time at home to give you a better sense of which cookbook (and recipes) are suitable for your specific level of culinary finesse. From the beginner who is most comfortable microwaving a Trader Joe’s frozen dinner to the expert who can whip up a meal for ten people with just the crumbs in her pantry, we found three members of our staff willing to be your guinea pigs and alter egos.

Every week, we’ll set a theme and give each of our cooks a recipe that suits their cooking comfort level. Follow Sam, Lillian, and Madison as they reveal not only their final results, but also the goofs and triumphs they encountered along the way. Last week, they sautéed and stirred their way to three perfect bowls of risotto—what adventures and lessons will this week bring?

Theme of the week: Pasta 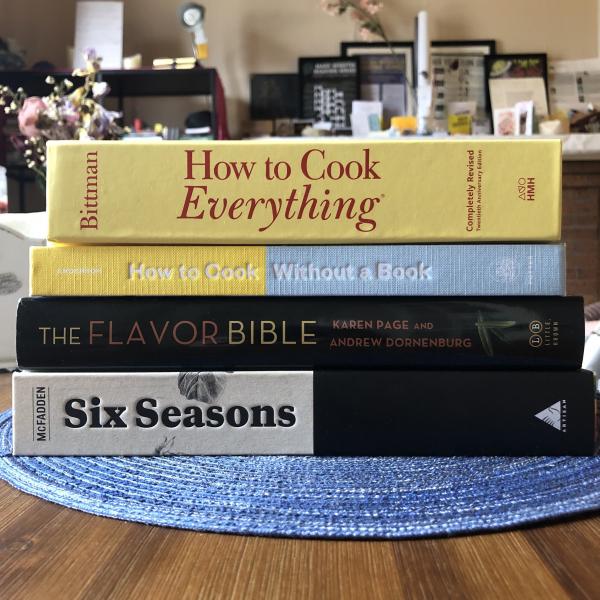 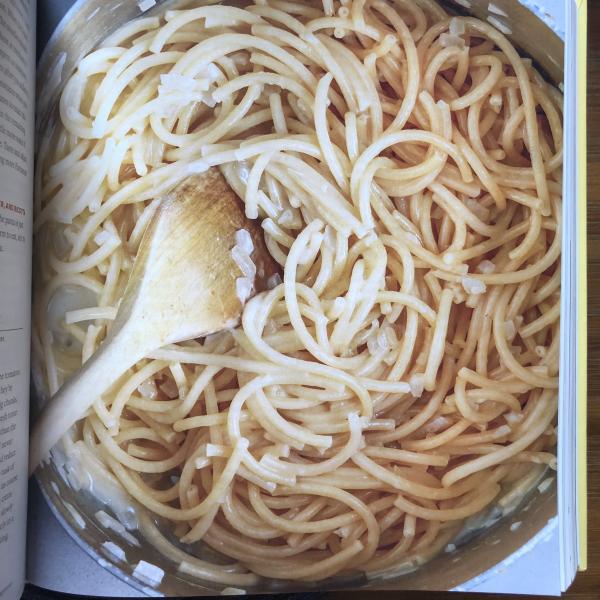 After my triumph in the buttery realm of risotto, it was time, as Emeril says, to kick it up a notch. So I made two bold leaps, the first from the children’s table of Mark Bittman’s How to Cook Everything: The Basics to the adult table of Mark Bittman’s How to Cook Everything, and the second from risotto to pasta carbonara. No minced words in HTCE proper––this dish, Bittman writes, is “basically pasta with bacon and eggs.” Yet there’s nothing basic about the rich results of his recipe, which even a humble novice like myself followed with little trouble. That said, I still learned quite a few lessons from my plunge into this porky pasta.

Lesson 1: Water takes a while to boil.

Don’t get me wrong: I’ve boiled plenty of water in my day. My dietary history includes so many boxes of Kraft Mac & Cheese that I’m practically a sponsor (though not literally a sponsor. If anybody from Kraft is reading this, let’s talk!). But those tubular morsels don’t require a heckuva lotta H2O, whereas several servings of pasta carbonara is a full-pot affair. So if, like me, you get a little hangry come dinnertime, get this step underway thirty minutes before you start cooking. That way, the only thing in danger of boiling over is the water.

When it comes to everything besides the pasta, Bittman recommends mixing eggs and parmesan in a warm bowl before adding bacon and, later, the pasta itself. But it seems to me that if bacon and grease are already lounging in your skillet, you might as well throw everything into said skillet. That way, you avoid the hassle of pouring hot bacon grease from one vessel to another, plus you wind up with plenty of room for tossing all your ingredients together. 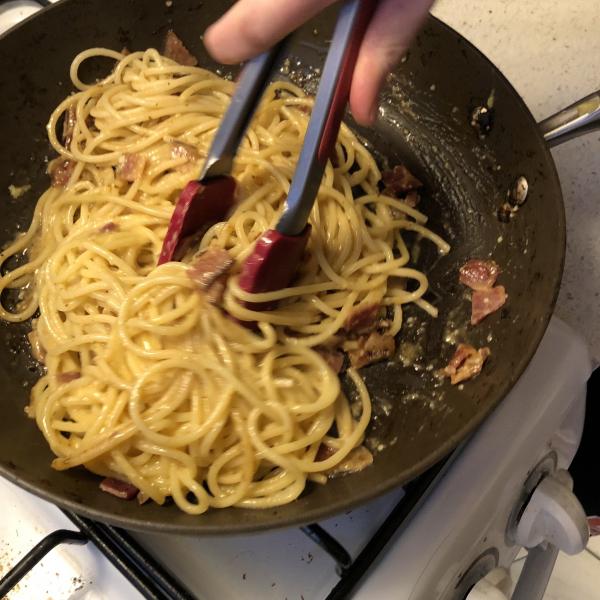 Lesson 3: An egg sauce is not an egg scramble.

When I mentioned my pasta carbonara adventure to a friend, he confessed his attempts always resulted in more of a “pasta and scrambled eggs situation.” Delicious, to be sure, though not a carbonara in the truest sense. To achieve pure carbonara perfection, make sure you’re adding your eggs to a skillet (or bowl) that is warm but not over heat. For fire is the sneaky culprit that strong-arms raw eggs into sprinting right past creamy to solid, and Bittman’s wonderful carbonara sauce is worth observing the distinction.

Verdict: Another Bittman recipe that empowers culinary neophytes to create a yummy plate of pasta. 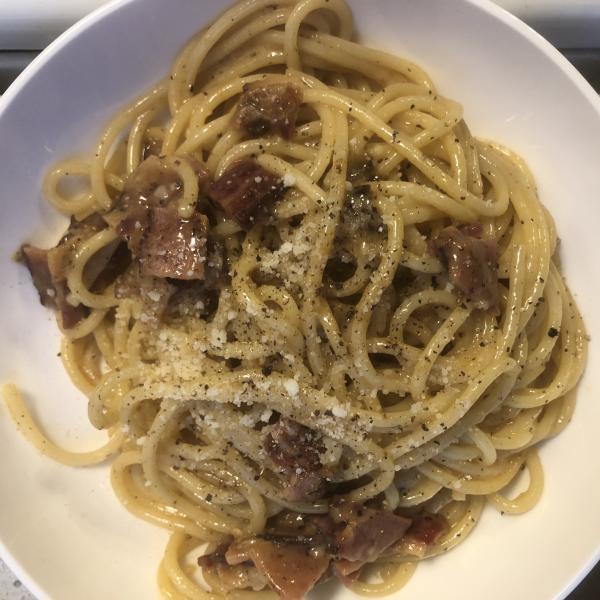 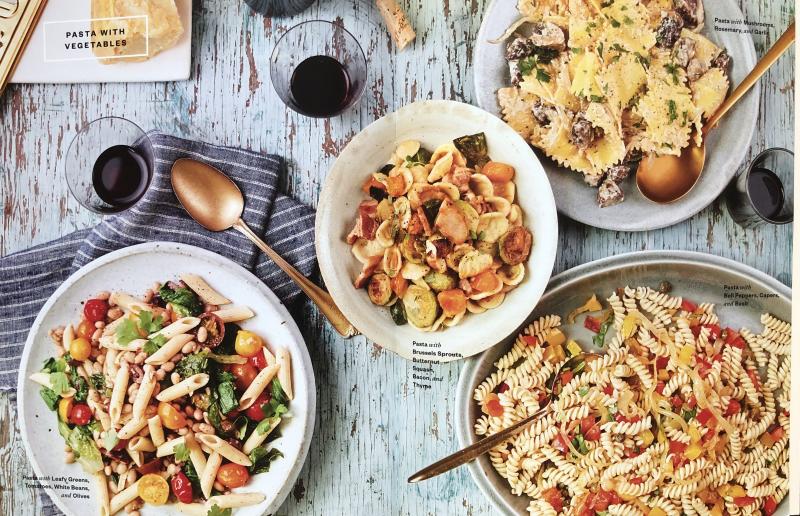 As I mentioned last week, my greatest weakness as a home cook is my total adherence to recipes and instructions. I am squeamish about substitutions, a teacher’s pet for nobody, tattle-telling on myself for using red pepper paste instead of tomato. In that same vein, this week’s theme was a gauntlet I threw down for myself. With pasta being one of the most customizable dishes in the world, and the shutdown limiting everyone’s grocery store trips, I decided I would go off-book and create something delicious out of only the ingredients moldering in my unstocked fridge. Enter Anderson’s recently updated classic, How to Cook Without a Book. Anderson posits that a few simple formulae and techniques can turn groceries into dinner without the pesky middle step of Googling “sausage carrots anchovies pasta recipes?” What I found in Anderson’s cookbook was a set of guidelines that set me free—exactly what this nervous recipe-breaker needed.

Lesson 1: Think of ingredients as families, not individuals.

The casualties from last week’s risotto challenge included a fist-sized portion of eggplant, and fennel meant for the vegetable stock I was too lazy to make. In other words, an unorthodox amount of one ingredient, in concert with an ingredient that I rarely use. Has anyone ever tried to Google “small bit of eggplant fennel recipe?” Thankfully, Anderson’s formula for “Pasta with Tender Vegetables” included one pound of any mix of veggies that require direct high heat, from bell peppers to cabbage, from eggplant to fennel. Using a formula that called for such specific ingredients as Flavorings, Enrichments, and Fat, I started to see that I was too zoomed-in. By linking eggplant and fennel to the tender vegetable family tree, rather than as individuals, I felt free to throw them into the pot without having to look up the cooking times for each. 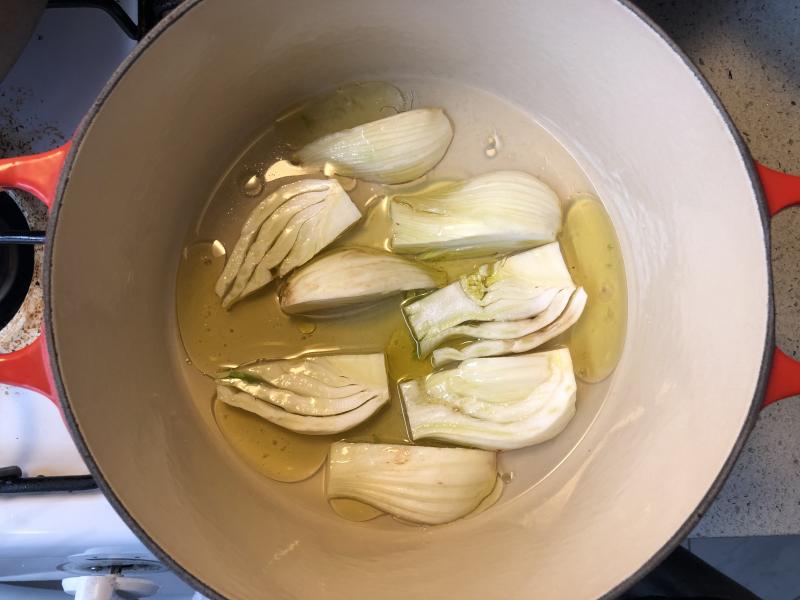 Pasta with just eggplant and fennel seemed rather plain, even if it did clean out my produce drawer. I wanted more flavors to mingle together, but was at a loss for what to add to a formula as stripped-own as Anderson’s. Luckily, I had a copy of Dornenburg and Page’s critically acclaimed Flavor Bible. More an index than a bible, The Flavor Bible is a comprehensive list of what ingredients go well together. Do you know what goes well with both eggplant and fennel? Italian sausage (of which I had a leftover link from a past dinner of sausage and peppers)! Tomatoes (of which I had a leftover can from a past lunch of minestrone soup)! Fennel seeds (of which I had an unopened bottle from a grocery store sale)! Some great meals must give thanks to fate, and some to a very comprehensive index.

Lesson 3: Sometimes the ingredient you never use is the one you can’t get enough of.

I’ll admit it—I went a little fennel crazy. For years I was intimidated by its frilly fronds and fat-fisted bulbs, but once I dismantled the strange vegetable, I became more and more enchanted by its licorice bite. I suppose the fennel muse spoke to me in that moment. Use my fronds for garnish, it whispered. Pulverize my seeds for spice. You can’t say no to the muse, and I’m glad I didn’t. 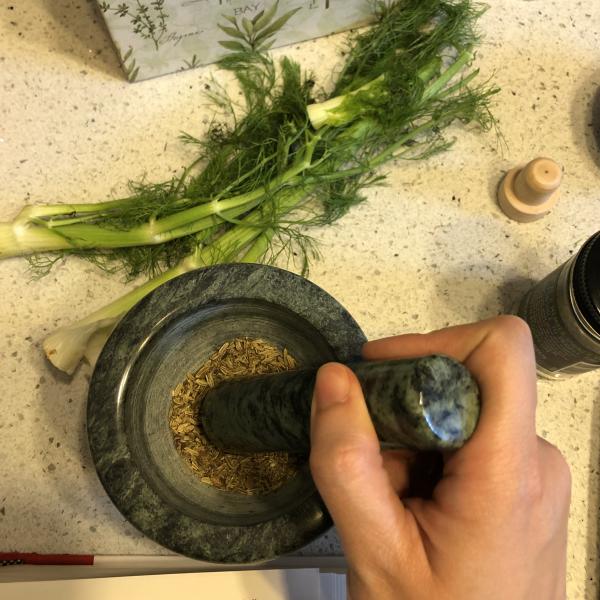 Verdict: Give me formulas over recipes any day! 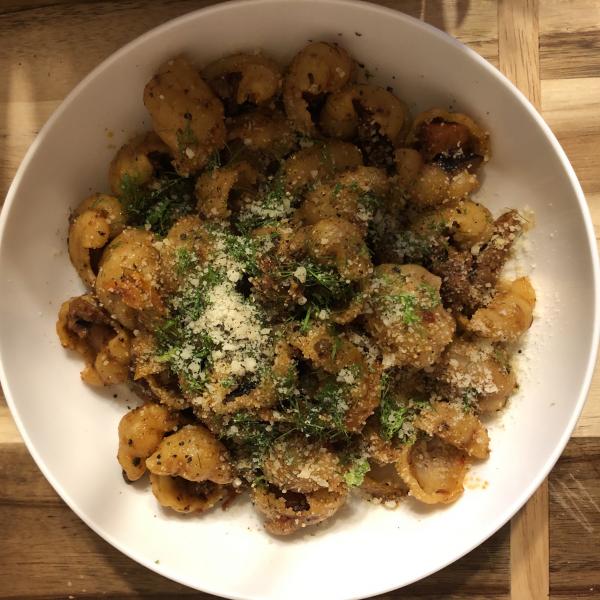 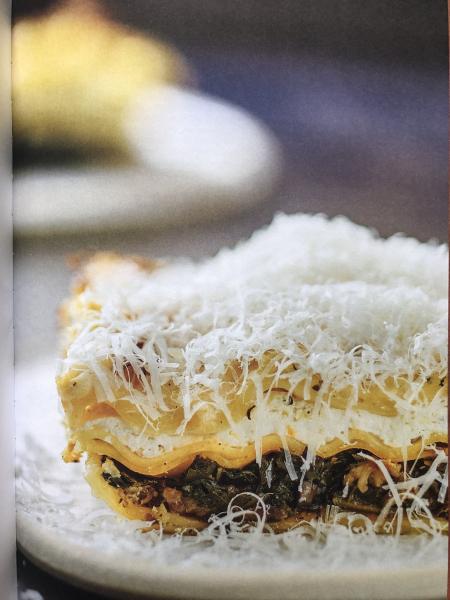 I lost my innocence the day I learned that not all lasagnas are made with cottage cheese. “Ricotta” was an exotic word, which I thought meant some sort of mysterious yogurt. Eventually I learned not only what ricotta was but also how to make it from scratch, which turned out to be the easiest thing in the world UNTIL I discovered vegan ricotta, which is what we made for this recipe and I can’t recommend it enough. Our lasagna wasn’t exactly vegan, because we used eggs for the pasta, but we didn’t use a lick of dairy, which was awesome for those of us aspiring toward cruelty-free cooking.

We based the recipe on Joshua McFadden’s Kale and Mushroom Lasagna, from his cookbook, Six Seasons. This is another house favorite. It celebrates hyper-seasonality and teaches you how to cook, instead of entirely what to cook. 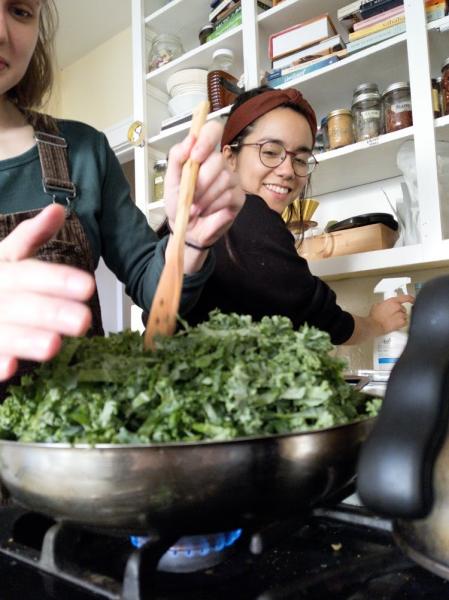 I’m serious!!! The Six Seasons recipe calls for ricotta and béchamel. For our ricotta, we just soaked 2 cups of walnuts in 2 cups of hot water for a few hours, strained them, and zipped them in a blender with fresh water, garlic, lemon, and salt until smooth and creamy. It was so similar in vibe to regular ricotta, plus walnuts SO GOOD FOR YOU. Our bechamel was just some celery roots chopped and roasted and then whipped up in a food processor with water, olive oil, lemon and salt. Also perfect.

Lesson 2: Fancy mushrooms if ya can!

We got king trumpets for this lasagna instead of the white buttons that the recipe suggests (although those would be good too!). These particular mushrooms are meatier than buttons, and make you want to savor every little instant. We didn’t use much. But every bite with a piece of mushroom was otherworldly, a real treat.

Turns out when you omit dairy from a lasagna you save a bunch of dollars. Who knew! When we calculated the cost of the whole thing, we were super pleased and surprised to see how much cheaper it was than when we made the original Joshua McFadden recipe last year, fancy mushrooms and all.

Bonus Lesson: Make sure you cook your pasta long enough (but not too long). We figured ours would continue to cook in the oven, which it did, but it was a little tiring to chew after a while. Granted, we made pasta from scratch and kept it nice and thick and rustic. Just feel your pasta out and make sure to hit that sweet spot. Or not, and work that jaw, baby. 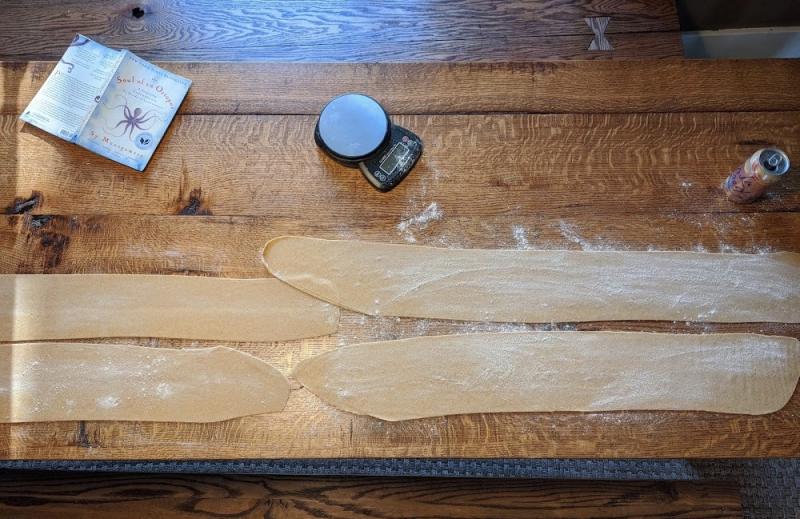 Verdict: Oh, will definitely re- (& re & re & re) make. I thought this would be the thing that made me miss dairy, but it did the opposite. Also, next time I want more ricotta, more bechamel, more mushrooms, more layers, more everything! Lasagna is Italian for luxury after all. (I made that up.) 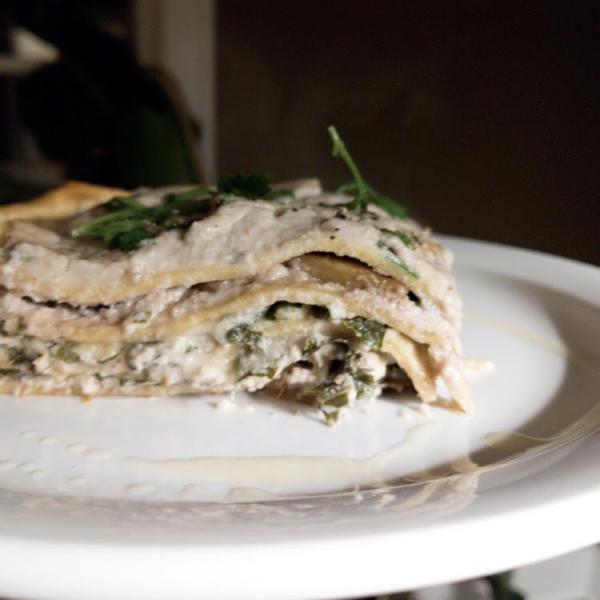 How to Cook Without a Book, Completely Updated and Revised: Recipes and Techniques Every Cook Should Know by Heart: A Cookbook (Hardcover)

The Flavor Bible: The Essential Guide to Culinary Creativity, Based on the Wisdom of America's Most Imaginative Chefs (Hardcover)