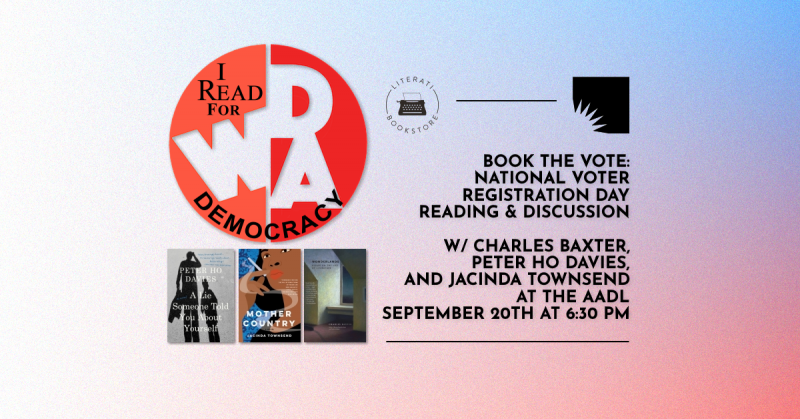 Join authors Charles Baxter, Peter Ho Davies, and Jacinda Townsend for a reading and discussion to celebrate National Voter Registration day and Book The Vote, an initiative by the Writers for Democratic Action.

Writers for Democratic Action is committed to bringing together the literary community to demand racial, gender, and economic justice, protect reproductive and LGBTQIA rights, champion suffrage for all people, oppose impediments to democratic government, and resist white supremacist, nationalist, and fascist movements. We stand vigilant in the service of the republic to promote the common good. WDA is launching BOOK THE VOTE, a drive to bring together readers, writers, booksellers, publishers, and librarians to register voters before the 2022 elections. Books themselves are threatened now, which is no surprise since books have always been essential to democracy. The Bookstore and the Library can be the frontline of the campaign to rescue it.

Authors Charles Baxter, Peter Ho Davies, and Jacinda Townswend will read. A voter registration table with volunteers will be present for those wishing to register to vote in Michigan.

Charles Baxter is the author of fourteen books, most recently the novel The Sun Collective. His stories have appeared in The Best American Short Stories, the Pushcart Prize anthology, and The O. Henry Prize Stories. He lives in Minneapolis.

Jacinda Townsend is the author of Saint Monkey, which won the Janet Heidinger Kafka Prize and the James Fenimore Cooper Prize. She is a graduate of the Iowa Writers’ Workshop and teaches in the MFA program at the University of Michigan in Ann Arbor.

Peter Ho Davie's novel, The Fortunes, won the Anisfield-Wolf Award and the Chautauqua Prize and was a New York Times Notable Book of the Year. He is also the author of The Welsh Girl, long-listed for the Man Booker Prize and a London Times best-seller, as well as two critically acclaimed collections of short stories. His fiction has appeared in Harpers, the Atlantic, the Paris Review, and Granta and has been anthologized in Prize Stories: The O. Henry Awards and The Best American Short Stories.

Wonderlands: Essays on the Life of Literature (Paperback)