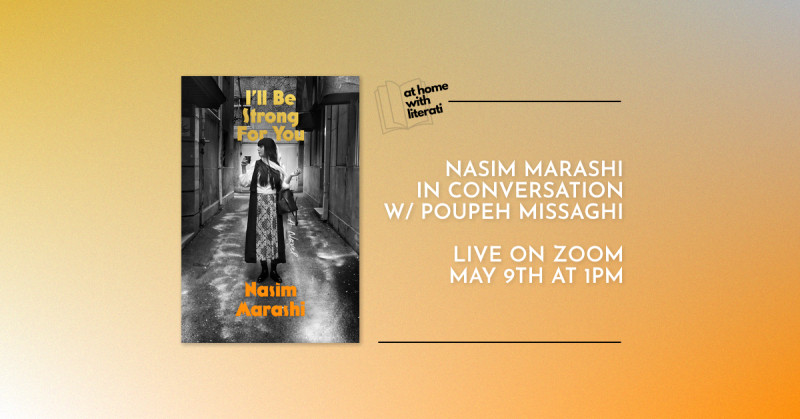 We're pleased to welcome Nasim Marashi to our At Home with Literati Series in support of I'll Be Strong for You. She'll be joined in conversation by translator Poupeh Missaghi.

This award-winning debut novel by Iranian journalist Nasim Marashi follows the lives of three young women in Tehran over the course of two seasons as they pursue their wildly different dreams even as they discover that it may mean breaking with the past and endangering their longstanding friendship. Three recent college graduates in Tehran struggle to find their footing in this award-winning debut by Iranian journalist Nasim Marashi. Roja, the most daring of the three, works in an architecture firm and is determined to leave Tehran for graduate school in Toulouse. Shabaneh, who is devoted to her disabled brother and works with Roja, is uncertain about marrying a colleague as it would mean leaving her family behind. Leyla, who was unable to follow her husband abroad because of her commitment to her career as a journalist, is wracked with regret. Over the course of two seasons, summer and fall, in bustling streets and cramped family apartments, the three women weather setbacks and compromises, finding hope in the most unlikely places. Even as their ambitions cause them to question the very fabric of their personalities and threaten to tear their friendship apart, time and again Roja, Shabaneh and Leyla return to the comfort of their longtime affection, deep knowledge and unquestioning support of each other. Vividly capturing three very distinct voices, Marashi's deeply wrought narrative lovingly brings these young women and their friendship to life in all their complexity.
Nasim Marashi was born in Tehran, Iran in 1984. She started her career in journalism in 2007 and became a screenwriter in 2013. She won the Premier Prix in Bayhaqi Story Prize (2014) for the short story, Nakhjir, and the Premier Prix in Tehran Story Prize (2015) for the short story, Rood. Her debut novel, I'll Be Strong for You  (Cheshmeh Publications, 2015) was selected as the Best Novel of the Year in the 8th Jalal-e Al-e-Ahmad Prize and is in its 40th printing. The book was translated into Italian and Kurdish and received great acclaim. Marashi's second novel, Haras (Cheshmeh Publications, 2016) is in its 20th printing and has been translated into Turkish and Kurdish. Marashi is the co-writer of the feature film, Avalanche (2015), and the documentary 20th Circuit Suspects (2017).
Event date:
Sunday, May 9, 2021 - 1:00pm
Event address:
Live on your device

I'll Be Strong for You: A Novel (Hardcover)