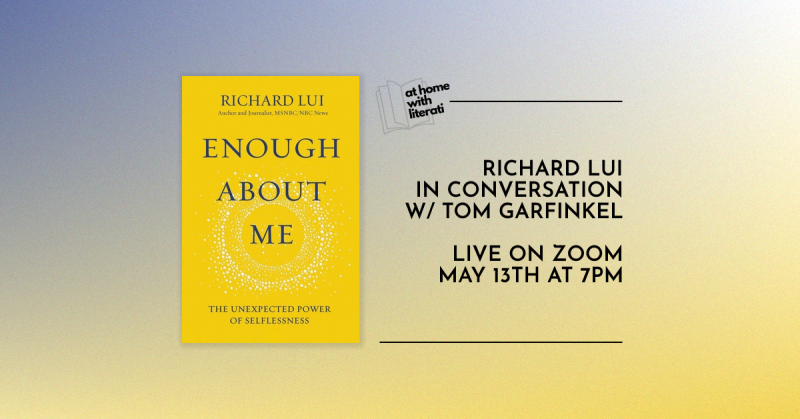 We're pleased to welcome Richar Lui to our At Home with Literati Series in support of Enough About Me. He'll be joined in conversation by Tom Garkfinkel.

About the book: Enough About Me equips you with practical tools to find meaning and compassion in even the smallest of everyday choices.

What if your path to a more successful, healthy, and satisfying life is actually not about you?

When his father was diagnosed with Alzheimer's disease, Richard Lui did something tough. The award-winning news anchor decided to set aside his growing career to care for family. Selflessness, however, did not come easily. So, Richard set out to explore why he struggled.

In every decision, big and small, Lui discovered hidden opportunities to put others ahead of himself. Similar to training physical muscles, we must train our decision-making muscles to choose others over ourselves in order to have unexpected smiles and renewed balance in our lives.

From a journalist's point of view, he digs into and shares stories from his seven-year "selfless" exploration. Lui shares practical tips, tools, and mnemonics learned along the way to help shift the way we think and live

Veteran journalist Richard Lui has more than 30 years in television, film, technology, and business. Currently at MSNBC and previously with CNN Worldwide, he is the first Asian American man to anchor a daily national cable news program, and a team Emmy and Peabody winner. In addition to journalism, Richard's 15-year business career involves a fintech patent and launching six tech brands over three business cycles. Richard has lived, worked, and volunteered on every continent. Learn more at richardlui.com.

Tom Garfinkel serves as Vice Chairman, President and Chief Executive Officer of the Miami Dolphins and Hard Rock Stadium.   Garfinkel serves on the board of the Dolphins Cancer Challenge, the National Football Foundation, the Gulliver School's Board of Trustees and the Sports Management Advisory Board and Ross School of Business Advisory Board at the University of Michigan.  Garfinkel graduated with a bachelor's degree from the University of Colorado, Boulder, and earned his MBA at the University of Michigan. In October 2020, Garfinkel earned the George Norlin Award, which recognizes outstanding CU Boulder alumni who have demonstrated a commitment to excellence in their chosen field of endeavor and a devotion to the betterment of society and their community

Enough about Me: The Unexpected Power of Selflessness (Hardcover)