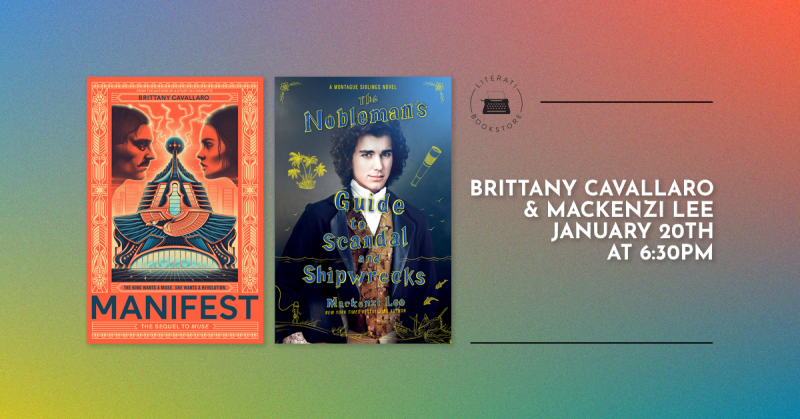 RSVP below to help us prepare seating accordingly. Please note that RSVPing does not guarantee seating. Seating will be first come first served followed by standing room only availability.

We're pleased to welcome Brittany Cavallaro & Mackenzi Lee in support of their recent titles, Manifest and The Nobleman's Guide to Scandal and Shipwrecks.

New York Times bestselling author Brittany Cavallaro delivers the thrilling conclusion to her YA duology set in a reimagined American monarchy about a girl fighting for her own freedom, trying to change the government from within . . . or burn it all down.

For the first time in her life, Claire Emerson isn't under a man's control. She's escaped from her dangerous father, and her fiancé, Governor Remy Duchamp, is too weak to rule. All eyes fall on Claire--and the power she could wield.

But that power is precarious as she and Remy are leading St. Cloud in exile after the General's attempted coup. And when King Washington descends on the small province, he brings with him his baseball team, Claire's brother, and a proximity to power Claire has never dreamed of.

With few allies to support her, she determines her best chance at survival is earning the King's good graces. Claire's schemes quickly get out of hand, reminding her that it isn't about who holds the power. It's about a system that grants such power to a select few, and the men who built it that way. Claire isn't anyone's muse, and if she can't fix the system from within, she's determined to be the spark of revolution in the First American Kingdom.

Brittany Cavallaro is the author of the New York Times bestselling Charlotte Holmes series and the poetry collection Girl-King. She earned her BA in literature from Middlebury College and her MFA in poetry from the University of Wisconsin-Madison. She lives in Michigan.

Mackenzi Lee holds a BA in history and an MFA from Simmons College in writing for children and young adults. She is the author of ten books, including The Gentleman’s Guide to Vice and Virtue, which was a New York Times bestseller, received a 2018 Stonewall Book Award Honor, and won the New England Book Award; and a series of novels for Marvel which tell the origin story of your favorite MCU antiheroes. The series will wrap up in February 2023 with THE WINTER SOLDIER: COLD FRONT.

The Nobleman's Guide to Scandal and Shipwrecks (Montague Siblings #3) (Paperback)

The Gentleman’s Guide to Getting Lucky (Montague Siblings Novella) (Paperback)

The Gentleman's Guide to Vice and Virtue (Montague Siblings #1) (Paperback)