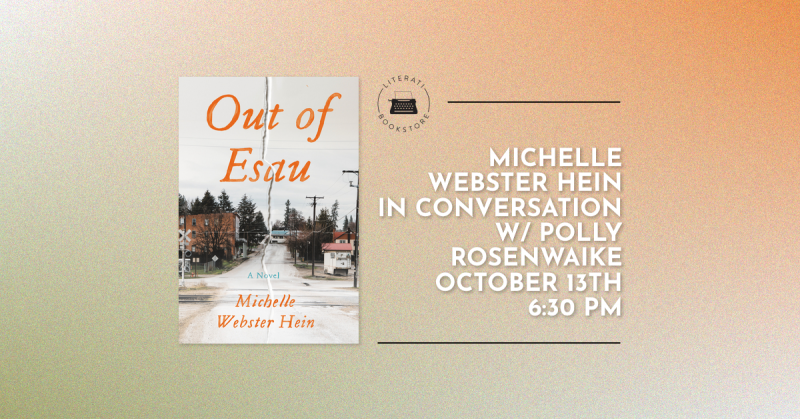 We're pleased to host Michelle Webster-Hein in support of Out of Esau. She'll be joined in-conversation by Polly Rosenwaike.

About the book: When a woman questioning her marriage encounters the kind and steadfast pastor of her small town, they are both forced to reconsider their pasts, their faith, and their future.

Robert Glory has never quite felt as though he fit in the small town of Esau, Michigan, but he finds solace in his role as the pastor of Esau Baptist and in his spare, orderly routine. When Susan Shearer arrives at his church seeking the strength to stay true to her increasingly volatile husband, neither expect that their immediate connection will upend both of their lives. As their relationship deepens and Susan's life at home becomes more unstable, Robert and Susan are forced to confront the wounds that have shaped them and discover if they still have the power to change.

Told from five different perspectives--including Susan's husband, Randy, her brilliant but high-strung young daughter, Willa, and Robert's long-estranged mother, Leotie-- Out of Esau is a visceral look at the dynamics of an abusive marriage, a nuanced portrait of faith and its loss, and a sweeping story of redemption.

MICHELLE WEBSTER-HEIN and her family work a small homestead in the southern Michigan countryside where she was born and raised. Out of Esau is her first novel.

POLLY ROSENWAIKE is the author of the story collection Look How Happy I’m Making You (Doubleday, 2019). She has published stories in The O. Henry Prize Stories, Glimmer Train, New York Magazine’s “The Cut,” New England Review, Colorado Review, and other magazines. Her reviews and essays have appeared in the San Francisco Chronicle, New York Times Book Review, Lit Hub, and The Millions. Polly has taught creative writing to college students at Eastern Michigan University and to elementary and middle school students through Seattle Arts & Lectures’ Writers in the Schools program and Hugo House. Currently, she serves as fiction editor for Michigan Quarterly Review and works as a freelance editor. Polly lives in Ann Arbor with the poet Cody Walker and their two daughters.

Out of Esau: A Novel (Hardcover)