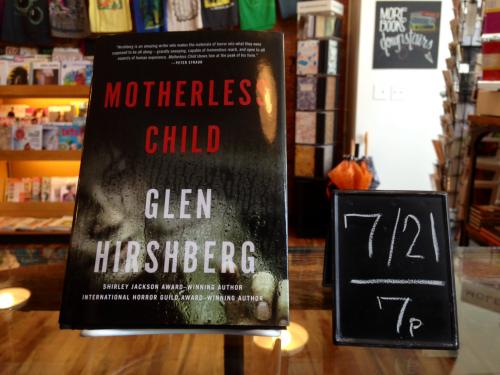 Literati is pleased to welcome Detroit native Glen Hirshberg, who will read  from his latest novel, Motherless Child.

On a rare night out in Charlotte, North Carolina, Natalie and Sophie — best friends, single moms, music lovers — meet the Whistler at the Back Way Out. In the aftermath of that encounter, desperate to save their children and, just maybe, themselves, they flee together down the back roads of the Deep South, pursued by guilt, the Whistler and his Mother, and their own growing, terrible hunger.

Bloody, sexy, rollicking, and sad, Motherless Child is a road novel about finding a way back to a home that no longer exists, a paean to music that drives us out of ourselves, a howling joyride toward heartbreak, and just maybe the vampire novel you really haven’t yet read: the human one.

"A subversive, thrilling novel that subverts everything we've come to expect from tales that traffic in the undead, Motherless Child is as heartbreaking as it is terrifying, a breakneck midnight ride through a part of America too seldom visited in fiction. It's Glen Hirshberg as his best, and I can offer no higher praise than that."
-- Elizabeth Hand, author of Generation Loss

Glen Hirshberg was born in Detroit in 1966, and grew up there and in San Diego. He received his B.A. from Columbia University, where he won the Bennett Cerf Prize for Best Fiction, and his M.A. and M.F.A. from the University of Montana.

Glen Hirshberg lives in the Los Angeles area with his wife and children.