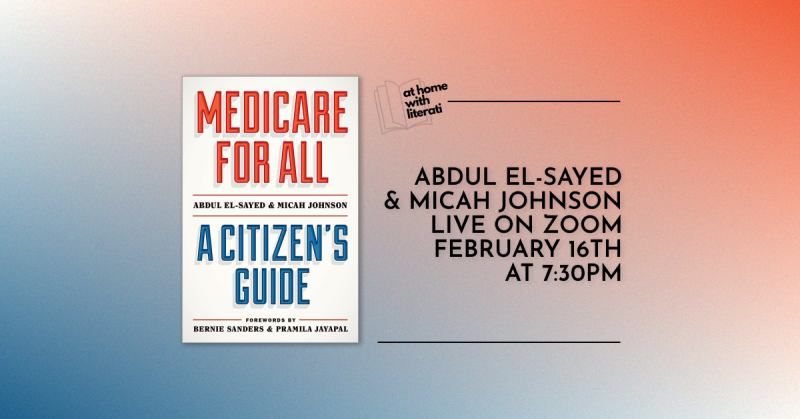 We're pleased to welcome Abdul El-Sayed and Micha Johnson in support of Medicare for All: A Citizen's Guide.

About the book: A citizen's guide to America's most debated policy-in-waiting

There are few issues as consequential in the lives of Americans as healthcare--and few issues more politically vexing. Every single American will interact with the healthcare system at some point in their lives, and most people will find that interaction less than satisfactory. And yet for every dollar spent in our economy, 19 cents go to healthcare. What are we paying for, exactly?

Healthcare policy is notoriously complex, but what Americans want is simple: good healthcare that's easy to use and doesn't break the bank. Polls show that as many as two in three Americans want the government to provide universal health coverage to all Americans.

What's less clear is how to get there.

Medicare for All is the leading proposal to achieve universal health coverage in America. But what is it exactly? How would it work? More importantly, is it practical or practicable?

This book goes beyond partisan talking points to offer a serious examination of how Medicare for All would transform the way we give, receive, and pay for healthcare in America.

Abdul El-Sayed, MD, DPhil, is a physician, epidemiologist, public health expert, and progressive activist. He rebuilt Detroit's Health Department after the City's bankruptcy as the youngest big-city health commissioner in a major US city. He ran for Governor of Michigan in 2018 on a state-level single-payer platform in a bid endorsed by Senator Bernie Sanders, Congresswoman Alexandria Ocasio-Cortez, The Nation, and Current Affairs. He holds a doctorate in Public Health from University of Oxford where he was a Rhodes Scholar, and a medical degree from Columbia University.
Micah Johnson, MD, is a physician and a health care researcher, writer, and policy advisor. He served as a health policy fellow in the U.S. House of Representatives and has advised presidential campaigns on health care reform. He holds a degree in philosophy, politics, and economics from the University of Oxford where he was a Rhodes Scholar, and he received his MD from Harvard Medical School. He is currently a resident physician in internal medicine at Brigham and Women's Hospital in Boston, Massachusetts.
Event date:
Tuesday, February 16, 2021 - 7:30pm
Event address:
Live on your device

Medicare for All: A Citizen's Guide (Hardcover)