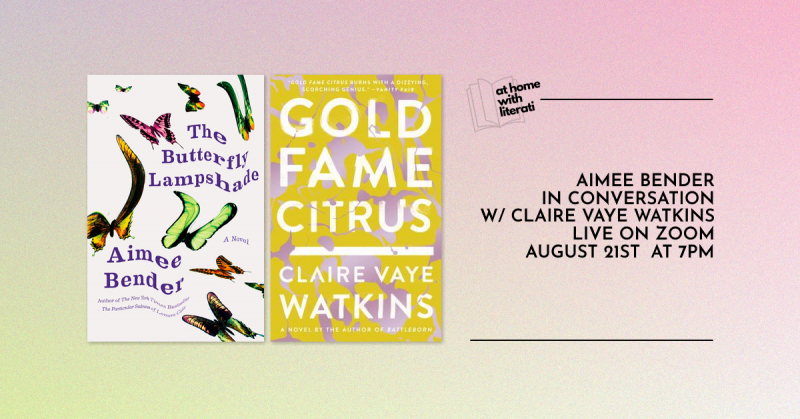 We're pleased to welcome Aimee Bender to our At Home with Literati series of virtual events in support of Butterfly Lampshade. She'll be in conversation with author Claire Vaye Watkins.

About the book: The first novel in ten years from the author of the beloved New York Times bestseller The Particular Sadness Of Lemon Cake, a luminous, poignant tale of a mother, a daughter, mental illness, and the fluctuating barrier between the mind and the world.

Aimee Bender is the author of the novels The Particular Sadness of Lemon Cake--a New York Times bestseller--and An Invisible Sign of My Own, and of the collections The Girl in the Flammable Skirt, Willful Creatures, and The Color Master. Her works have been widely anthologized and have been translated into sixteen languages. She lives in Los Angeles.

Claire Vaye Watkins is the author of Battleborn, winner of the Story Prize, the Rosenthal Family Foundation Award from the American Academy of Arts and Letters, and a Silver Pen Award from the Nevada Writers Hall of Fame, and Gold Fame Citrus. Battleborn was named a Best Book of 2012 by the San Francisco Chronicle, Boston Globe, Time Out New York, and Flavorwire, and a Best Short Story Collection by NPR.org. In 2012, the National Book Foundation named Claire one of the 5 Best Writers Under 35. Her stories and essays have appeared in Granta, One Story, The Paris Review, Ploughshares, Glimmer Train, Best of the West 2011, Best of the Southwest 2013, and elsewhere.

The Butterfly Lampshade: A Novel (Hardcover)