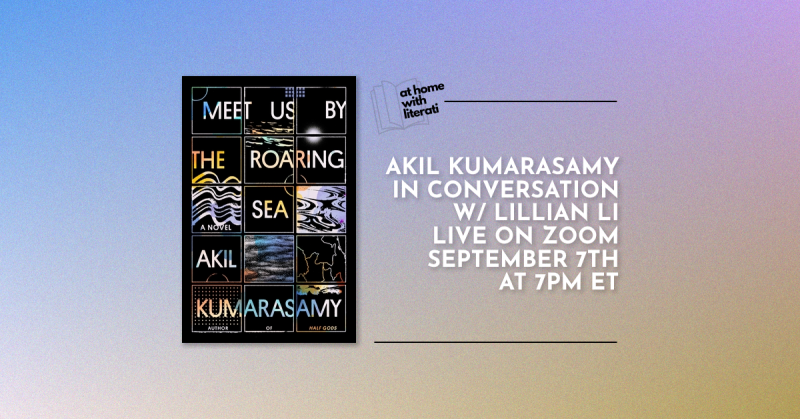 We're pleased to welcome Akil Kumarasamy to our At Home with Literati Series in support of Meet Us by the Roaring See. She will be joined in conversation by Lillin Li.

Click here to join the webinar event on 9/7. No pre-registration required!

"Akil Kumarasamy is a singular talent . . . I love this book." —Cathy Park Hong

Written in vivid and pulsating prose, alternating between the young woman’s present life and passages of the translated manuscript, Akil Kumarasamy’s Meet Us by the Roaring Sea is a remarkable, genre-bending exploration of memory, technology, friendship, love, consciousness, and the costs of caring for others in an age when we are so often lost in the swamps of our own minds.

In the near future, a young woman finds her mother’s body starfished on the kitchen floor in Queens and sets on a journey through language, archives, artificial intelligence, and TV for a way back into herself. She begins to translate an old manuscript about a group of female medical students—living through a drought and at the edge of the war—as they create a new way of existence to help the people around them. In the process, the translator’s life and the manuscript begin to become entangled.

Along the way, the arrival of a childhood friend, a stranger, and an unusual AI project will force her to question her own moral compass and sense of goodness. How involved are we in the suffering of others? What does real compassion look like? How do you make a better world?

Akil Kumarasamy is the author of the linked story collection Half Gods, which was named a New York Times Editors' Choice, was awarded the Bard Fiction Prize and the Story Prize Spotlight Award, and was a finalist for the PEN/Robert W. Bingham Prize for Debut Short Story Collection. Her work has appeared in Harper's Magazine, American Short Fiction, BOMB, and other publications. She has received fellowships from the University of East Anglia, the Fine Arts Work Center in Provincetown, Yaddo, and the Schomburg Center for Research in Black Culture. She is an assistant professor in the Rutgers University-Newark MFA program.

Lillian Li received her BA from Princeton and her MFA from the University of Michigan. She is the recipient of a Hopwood Award in Short Fiction, as well as Glimmer Train's New Writer Award. Her work has been featured in Guernica, Granta , and Jezebel. She is from the D.C. metro area and lives in Ann Arbor, Michigan. Number One Chinese Restaurant is her first novel.

Meet Us by the Roaring Sea: A Novel (Hardcover)