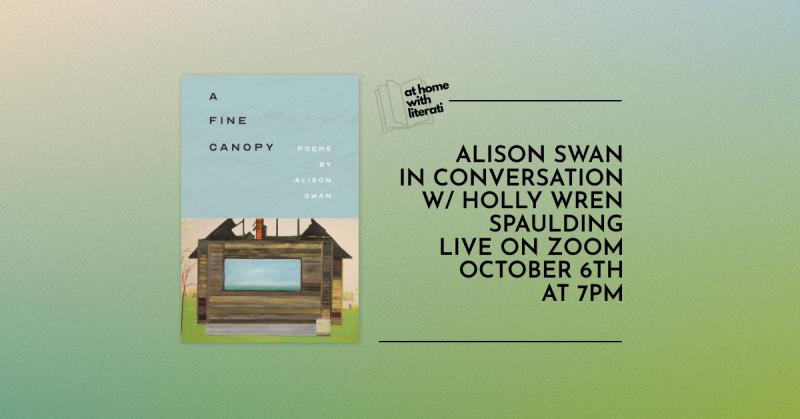 We're pleased to welcome Alison Swan to our At Home with Literati series to launch her new poetry collection, A Fine Canopy. She'll be in conversation with poet Holly Wren Spaulding.

Alison Swan’s collection of poems, A Fine Canopy, illustrates how the natural world envelops and encloses us with so many beautiful things: crowns of leaves, the ubiquitous blue sky, our luminous moon, and snow. So much snow. An ecopoet whose writing shows her advocacy for natural resources, in this collection Swan calls the reader to witness, appreciate, and sustain this world before it becomes too late.

These poems were written out of an impulse to track down wisdom in the open air, outside of the noisy world of cars and commerce. Swan seeks insight on shores and in scraps of woods and fields—especially on four particular peninsulas: Michigan’s upper and lower, Florida, and Washington state’s Olympic—and also inside motherhood, which might be the wildest place of all. These are poems about the interconnection of all things, and "knowing things we cannot see." A journey through seasons with a soundtrack of birdsong, Swan’s words are incredibly sensory. The reader is made to feel the weight of muddy jeans, the jolt at the tug of a dog’s leash, and to see the bright flash of a cardinal’s red plumage. Swan’s poems remind us that although we all want to make a mark on our world, the smaller the better: stepping into fresh snow, dashing through forests atop dry leaves, laying wet bodies on warm concrete. These quiet interactions with places are as hopeful as they are harmless.

Without necessarily tackling the topics head-on, A Fine Canopy evokes the devastation of climate change and the destruction of natural resources. This book engages deeply with the other-than-human to express and investigate alarm, dismay, anger, admiration, adoration in what feels like the end of the world unless we begin to think outside the box. These poems will carry weight with all readers of poetry, especially those who are interested in ecopoetry and connecting with the world around them.

Born in the Great Lakes basin, Alison Swan is a Mesa Refuge alum and a Petoskey Prize for Grassroots Environmental Leadership co-winner. Her poems and environmental writing have appeared in two chapbooks and in many anthologies and journals. She teaches at Western Michigan University and lives in the Huron and Kalamazoo River watersheds. Her Great Lakes collection, Fresh Water, was named a Michigan Notable Book.

Holly Wren Spaulding’s poems, articles and reviews have appeared in The New York Times, The Nation, Michigan Quarterly Review, Witness, The Ecologist, and in the book We Are Everywhere: The Irresistible Rise of Global Anti-Capitalism (Verso, 2003). Alice Greene & Co. published IF August in 2017, and Pilgrim, in 2014. A passionate collaborator, teacher, editor, and writer, Ms. Spaulding has been awarded residencies at The Mesa Refuge, Blue Mountain Center, The Millay Colony for the Arts, The Hill House, The Jean Noble Parsons Center for the Study of Art & Science, Arrowmont School of Arts & Crafts, and the Leelanau Cultural Center, where she was the 2017 Ann Hall Artist in Residence. She founded Poetry Forge in 2012, and teaches creative writing for Interlochen College of Creative Arts.

A Fine Canopy (Made in Michigan Writers) (Paperback)

Elemental: A Collection of Michigan Creative Nonfiction (Made in Michigan Writers) (Paperback)