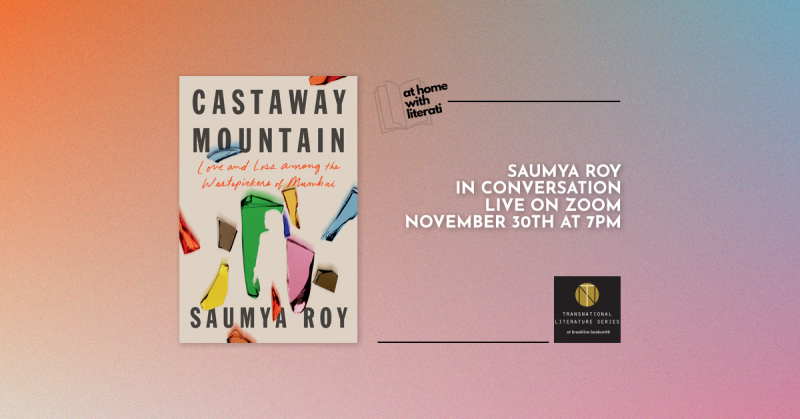 We're pleased to partner with the Transnational Literature Series at Brookline Booksmith in welcoming Saumya Roy to our At Home with Literati Series in support of Castaway Mountain. She'll be in conversation with Karan Mahajan.

Click here to join the webinar event on 11/30. No pre-registration required!

About the book: All of Mumbai's possessions and memories come to die at the Deonar garbage mountains. Towering at the outskirts of the city, the mountains are covered in a faint smog from trash fires. Over time, as wealth brought Bollywood knock offs, fast food and plastics to Mumbaikars, a small, forgotten community of migrants and rag-pickers came to live at the mountains' edge, making a living by re-using, recycling and re-selling.

Among them is Farzana Ali Shaikh, a tall, adventurous girl who soon becomes one of the best pickers in her community. Over time, her family starts to fret about Farzana's obsessive relationship to the garbage. Like so many in her community, Farzana, made increasingly sick by the trash mountains, is caught up in the thrill of discovery--because among the broken glass, crushed cans, or even the occasional dead baby, there's a lingering chance that she will find a treasure to lift her family's fortunes.

As Farzana enters adulthood, her way of life becomes more precarious. Mumbai is pitched as a modern city, emblematic of the future of India, forcing officials to reckon with closing the dumping grounds, which would leave the waste pickers more vulnerable than ever.

In a narrative instilled with superstition and magical realism, Saumya Roy crafts a modern parable exploring the consequences of urban overconsumption. A moving testament to the impact of fickle desires, Castaway Mountain reveals that when you own nothing, you know where true value lies: in family, community and love.

Saumya Roy is a social entrepreneur, journalist, and activist based in Mumbai. She co-founded Vandana Foundation in 2016, a non-profit that provides microloans to entrepreneurs in Mumbai and rural Maharashtra. She has written for Forbes India, Mint newspaper, Outlook magazine, wsj.com, The Wire (India), The Wire (China) and Bloomberg News, among others. While working on Castaway Mountain, Saumya received fellowships from the Rockefeller Foundation's Bellagio Center, Blue Mountain Center, Carey Institute for Global Good, Sangam House, and Dora Maar House. In 2019, she appeared on the Solvable podcast series, featuring those working to solve the world's most intractable problems.
Karan Mahajan is the author of Family Planning, a finalist for the International Dylan Thomas Prize, and The Association of Small Bombs, which was shortlisted for the 2016 National Book Award, won the 2017 NYPL Young Lions Fiction Award, and was named one of the New York Times Book Review’s "10 Best Books of 2016." In 2017, he was selected as one of Granta’s Best Young American Novelists. His reporting and criticism have appeared in the New York Times, The New York Review of Books, Vanity Fair, The New Yorker Online, and other venues. He teaches at Brown University.
Event address:
Live on your device
Books:

Castaway Mountain: Love and Loss Among the Wastepickers of Mumbai (Hardcover)

The Association of Small Bombs: A Novel (Paperback)