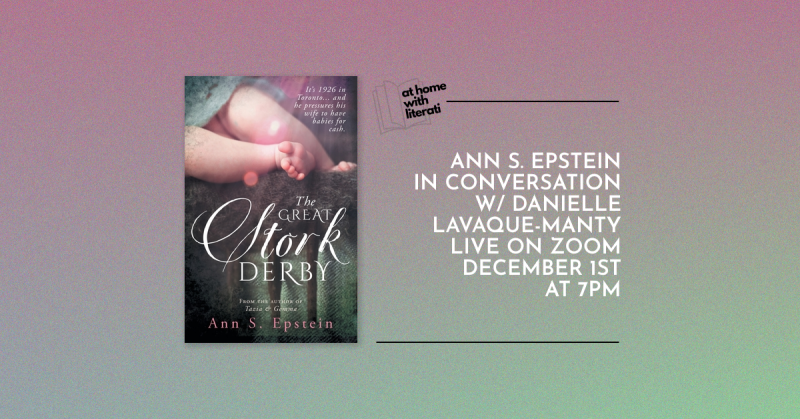 We're pleased to welcome Ann Epstein to our At Home with Literati Series in support of The Great Stork Derby. She will be joined in conversation by Danielle Lavaque-Manty.

Click here to join the webinar event on 12/1. No pre-registration required!

It's 1926 in Toronto, and Emm Benbow pressures his wife to have babies for cash.

An ambitious Emm Benbow convinces his wife, Izora, to enter the Great Stork Derby, a contest which offers a sizable cash award to the woman who has the most babies between 1926 and 1936. But soon his ambition turns into a ruthless obsession and addiction, and despite Izora's efforts, he is disappointed by his large family, and alienates himself from children.

Fifty years later, and now a widower, Emm is told by his doctor that he can no longer live alone. His only choice is to move in with one of his many adult children or go to a dreaded old age home. Living in turn with each of his offspring, Emm is given the chance to make amends. Not an easy task, when they believe he drove their mother to an early grave and saw each of them as a price tag. Can he come to terms with the idea that the true value of fatherhood is not measured in big prizes, but in small rewards, and treat his children the way they deserve?

A profound and delightful read, The Great Stork Derby explores the hardship endured during the Depression, the emergence of the women's and gay rights movements, and an earlier time when families interacted face-to-face around the dinner table. Highly charged with serious issues, plus the humor essential to confront them, you will turn the last page with a smile.

Ann S. Epstein writes novels, short stories, memoir, and essays. Her awards include a Pushcart Prize nomination for creative nonfiction, Walter Sullivan prize in fiction, and Editors' Choice selection by Historical Novel Review. Her other novels are On the Shore, Tazia and Gemma, and A Brain. A Heart. The Nerve. Her work also appears in North American Review, Sewanee Review, PRISM International, Ascent, The Long Story, The Minnesota Review, and elsewhere. In addition to writing, she has a PhD in developmental psychology and MFA in textiles, which shape the content and imagery of her work. Her website is: asewovenwords.com

Danielle Lavaque-Manty has interviewed many authors for Fiction Writers Review, and her own fiction has been published in Puerto del Sol, Ninth Letter, New Delta Review, and elsewhere. She was also the winner of the 2018 Iron Horse Literary Review Trifecta Prize in fiction.

On the Shore (Paperback)