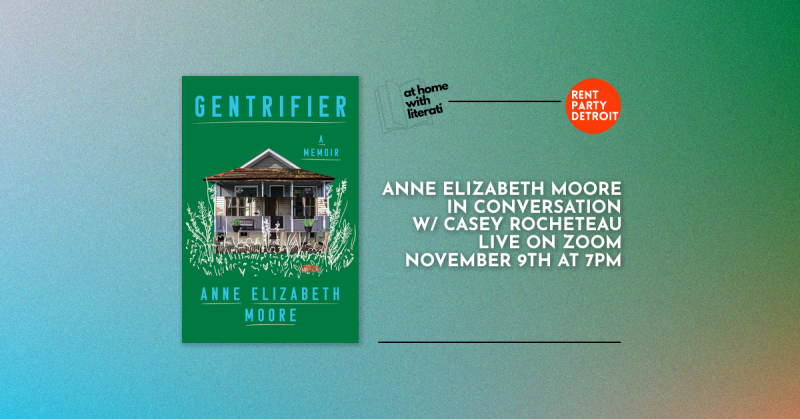 We're pleased to welcome Anne Elizabeth Moore to our At Home with Literati Series in support of Gentrifier. She'll be in conversation with Casey Rochetau. The event will also highlight work of Rent Party Detroit. You can donate to Rent Party Detroit here.

Click here to join the webinar event on 11/9. No pre-registration required!

About the book: Taking on the thorny ethics of owning and selling property as a white woman in a majority Black city and a majority Bangladeshi neighborhood with both intelligence and humor, this memoir brings a new perspective to a Detroit that finds itself perpetually on the brink of revitalization.

In 2016, a Detroit arts organization grants writer and artist Anne Elizabeth Moore a free house--a room of her own, à la Virginia Woolf--in Detroit's majority-Bangladeshi "Banglatown." Accompanied by her cats, Moore moves to the bungalow in her new city where she gardens, befriends the neighborhood youth, and grows to intimately understand civic collapse and community solidarity. When the troubled history of her prize house comes to light, Moore finds her life destabilized by the aftershocks of the housing crisis and governmental corruption.

This is also a memoir of art, gender, work, and survival. Moore writes into the gaps of Woolf's declaration that "a woman must have money and a room of one's own if she is to write"; what if this woman were queer and living with chronic illness, as Moore is, or a South Asian immigrant, like Moore's neighbors? And what if her primary coping mechanism was jokes?

Part investigation, part comedy of a vexing city, and part love letter to girlhood, Gentrifier examines capitalism, property ownership, and whiteness, asking if we can ever really win when violence and profit are inextricably linked with victory.

Anne Elizabeth Moore was born in Winner, South Dakota. She has written several critically acclaimed nonfiction books, including the Lambda Literary Award-nominated Body Horror: Capitalism, Fear, Misogyny, Jokes, which was a Chicago Public Library Best Book of 2017, and Sweet Little Cunt, which won an Eisner Award. She lives in Hobart, New York, with her cat, Captain America.
Casey Rocheteau is an author, educator, and multidisciplinary artist with a background in historical studies. Born in Hyannis, MA, they currently reside in Detroit. They are a 2021 Kresge Literary Arts Fellow and were the recipient of the 2021 Noemi Book Award. They have received fellowships from Cave Canem, Callaloo Writers' Workshop, and Bread Loaf in Sicily. In 2014, Rocheteau created the Shrine of the Black Medusa Tarot. Casey's work has been featured in I-D Magazine, Michigan Radio, Poets.org, The Offing, LitHub and Apogee Magazine. Casey is the Communications Manager for the Detroit Justice Center.
Event address:
Live on your device
Books: