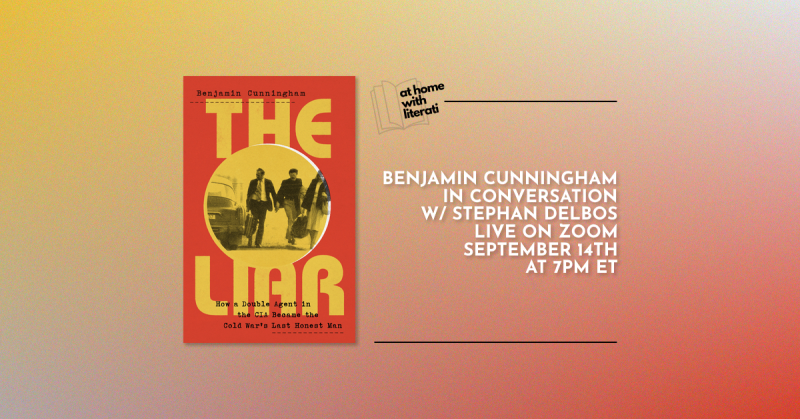 We're pleased to welcome Benjamin Cunningham to our At Home with Literati Series in support of The Liar. They will be joined in conversation by Stephan Delbos.

Click here to join the webinar event on 9/14. No pre-registration required!

The Cold War meets Mad Men in the form of Karel Koecher, a double agent whose shifting loyalties and over-the-top hedonism reverberated from New York to Moscow

In the mid-1970s, the CIA and KGB watched Karel Koecher closely—they were both convinced he was working for the enemy. And they were both right. Traveling with his wife, Hana, Koecher posed as a Czechoslovak asylum seeker and arrived in the US as a Communist sleeper agent. After parlaying a doctorate from Columbia into a job at the CIA, Koecher proceeded to operate as a double agent at the height of the Cold War.

Shunning a low profile, the Koechers embraced Manhattan’s high life—with cocaine, swinging, and parties emblematic of the times and their penchant for risk. Hana, who was no more than a shy teenager when she arrived, grew into a sophisticated international diamond dealer who relayed messages to Karel’s handlers. Riding a wave of euphoria, the Koechers felt unstoppable. But it was too good to last.

Using newly declassified documents, interrogation tapes, and extraordinary firsthand accounts from the Koechers themselves, Cunningham reconstructs their double lives and the fading Cold War, where a strange moral fog made it hard to know what truth was being fought for, and to what end.

Benjamin Cunningham is a correspondent for The Economist. He covered Central and Eastern Europe for six years, and now writes about the wider Mediterranean region from Barcelona. In addition he contributes to The Guardian, The Los Angeles Review of Books, Aspen Review, Le Monde Diplomatique and is an opinion columnist for Sme, Slovakia’s main daily newspaper. He is a PhD candidate at the University of Barcelona.

The Liar: How a Double Agent in the CIA Became the Cold War's Last Honest Man (Hardcover)