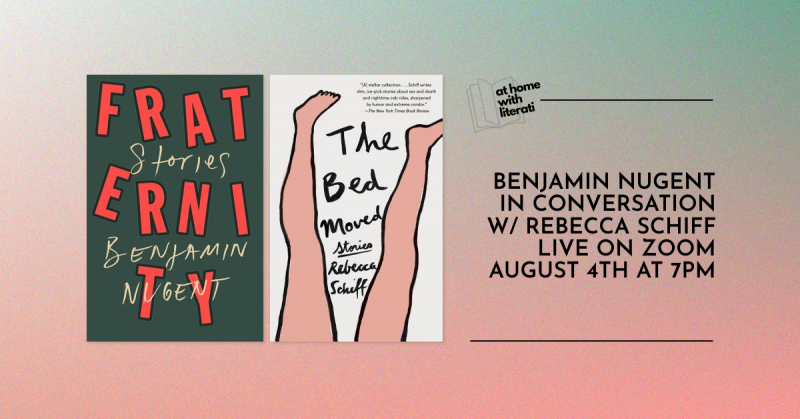 We're pleased to welcome Benjamin Nugent to our At Home with Literati series of virtual events in support of Fraternity. He'll be in conversation with author Rebecca Schiff.

About Fraternity: In a Massachusetts college town stands a dilapidated colonial: Delta Zeta Chi. Here, we meet Newton, the beloved chapter president; Oprah, the sensitive reader; Petey, the treasurer, loyal to a fault; Claire, the couch-surfing dropout who hopes to sell them drugs; and a girl known, for unexpected reasons, as God. Though the living room reeks of sweat and spilled beer, the brothers know that to be inside is everything. Fraternity celebrates the debauched kinship of boys and girls straddling adolescence and adulthood: the drunken antics, solemn confessions, and romantic encounters that mark their first years away from home. Beneath each episode lies the dread of exclusion. The closeted Oprah's hero worship gives way to real longing. A combat veteran offers advice on hazing. An alienated young woman searches for a sanctuary. And the shadow of assault hovers over every sexual encounter.

Rebecca Schiff is the author of the story collection The Bed Moved, a finalist for an LA Times Book Award in First Fiction. Her fiction has appeared in Electric Literature, n+1, The Guardian, Washington Square, and BuzzFeed, among other publications, and was anthologized in The Best Small Fictions 2017. She lives in Eugene, Oregon.