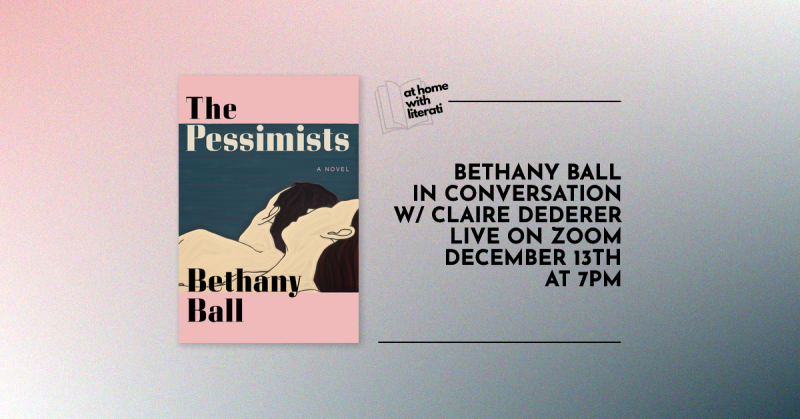 We're pleased to welcome Bethany Ball to our At Home with Literati Series in support of The Pessimists. She will be joined in conversation by Claire Dederer.

Click here to join the webinar event on 12/13. No pre-registration required!

Welcome to small-town Connecticut, a place whose inhabitants seem to have it all -- the status, the homes, the money, and the ennui. There's Tripp and Virginia, beloved hosts whom the community idolizes, whose basement hides among other things a secret stash of guns and a drastic plan to survive the end times. There's Gunter and Rachel, recent transplants who left New York City to raise their children, only to feel both imprisoned by the banality of suburbia. And Richard and Margot, community veterans whose extramarital affairs and battles with mental health are disguised by their enviably polished veneers and perfect children. At the center of it all is the Petra School, the most coveted of all the private schools in the state, a supposed utopia of mindfulness and creativity, with a history as murky and suspect as our character's inner worlds.

With deep wit and delicious incisiveness, in The Pessimists, Bethany Ball peels back the veneer of upper-class white suburbia to expose the destructive consequences of unchecked privilege and moral apathy in a world that is rapidly evolving without them. This is a superbly drawn portrait of a community, and its couples, torn apart by unmet desires, duplicity, hypocrisy, and dangerous levels of discontent.

Bethany Ball was born in Detroit and has lived in Santa Fe, New Jersey, Miami, and Israel. She now lives in New York with her family. She is the author of What to Do About the Solomons.

Claire Dederer is the author of the New York Times best-selling memoir Poser: My Life in Twenty-three Yoga Poses, which has been translated into twelve languages and which Elizabeth Gilbert called "the book we all need." A book critic, essayist, and reporter, Dederer is a longtime contributor to The New York Times and has also written for The Atlantic, Vogue, Slate, The Nation, and New York magazine, among other publications. She lives on an island near Seattle with her family.
Event address:
Live on your device
Books: