At Home with Literati: Bill Buford 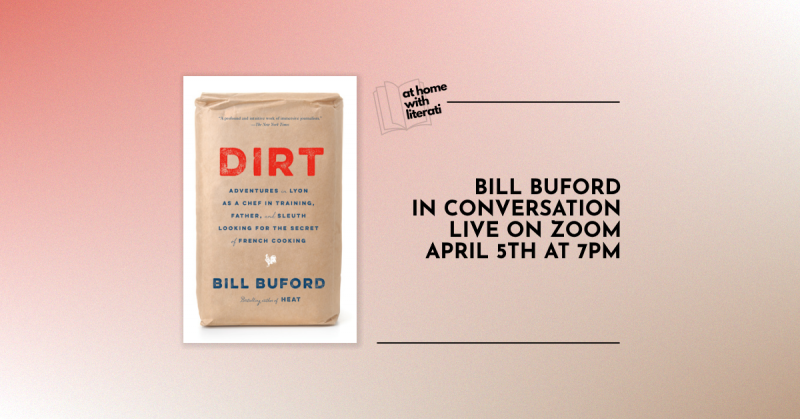 We're pleased to welcome Bill Buford to our At Home with Literati Series in support of the paperback release of Dirt.

"You can almost taste the food in Bill Buford's Dirt, an engrossing, beautifully written memoir about his life as a cook in France." --The Wall Street Journal

What does it take to master French cooking? This is the question that drives Bill Buford to abandon his perfectly happy life in New York City and pack up and (with a wife and three-year-old twin sons in tow) move to Lyon, the so-called gastronomic capital of France. But what was meant to be six months in a new and very foreign city turns into a wild five-year digression from normal life, as Buford apprentices at Lyon's best boulangerie, studies at a legendary culinary school, and cooks at a storied Michelin-starred restaurant, where he discovers the exacting (and incomprehensibly punishing) rigueur of the professional kitchen.

With his signature humor, sense of adventure, and masterful ability to bring an exotic and unknown world to life, Buford has written the definitive insider story of a city and its great culinary culture.

Bill Buford is the author of Heat and Among the Thugs. He has received a Marshall Scholarship, a James Beard Award, and the Comune di Roma's Premio Sandro Onofri for narrative reportage. For eighteen years, Buford lived in England, and was the founding editor of the literary magazine Granta and the founding publisher of Granta Books. He moved to the United States in 1995 to join The New Yorker, where he has been the fiction editor, a staff writer, and a regular contributor. In 2008, he moved with his family to Lyon, France, and lived there for five years. He was born in Baton Rouge, Louisiana, educated at University of California, Berkeley, and King's College, Cambridge, and now lives in New York City with his wife, the wine educator and writer Jessica Green, and their twin sons.
Event date:
Monday, April 5, 2021 - 7:00pm
Event address:
Live on your device

Dirt: Adventures in Lyon as a Chef in Training, Father, and Sleuth Looking for the Secret of French Cooking (Paperback)

Heat: An Amateur's Adventures as Kitchen Slave, Line Cook, Pasta-Maker, and Apprentice to a Dante-Quoting Butcher in Tuscany (Paperback)

Among the Thugs (Vintage Departures) (Paperback)