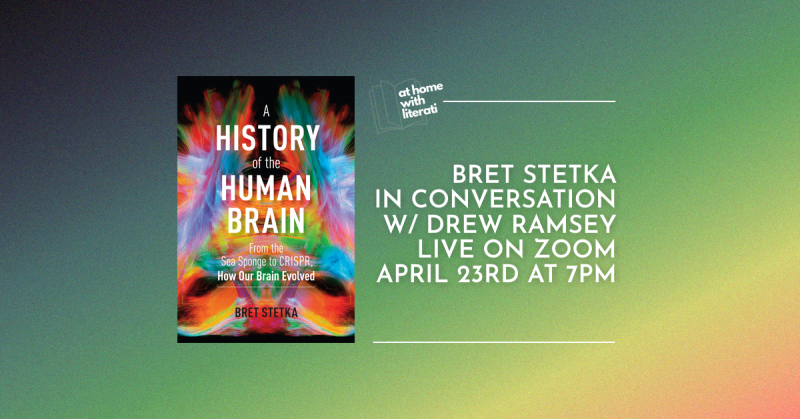 We're pleased to welcome Bret Stetka to our At Home with Literati Series in support of A History of the Human Brain. He'll be joined in conversation by Dr. Drew Ramsey.

About the book: Just 125,000 years ago, humanity was on a path to extinction, until a dramatic shift occurred. We used our mental abilities to navigate new terrain and changing climates. We hunted, foraged, tracked tides, shucked oysters--anything we could do to survive. Before long, our species had pulled itself back from the brink and was on more stable ground. What saved us? The human brain--and its evolutionary journey is unlike any other.

In A History of the Human Brain, Bret Stetka takes us on this far-reaching journey, explaining exactly how our most mysterious organ developed. From the brain's improbable, watery beginnings to the marvel that sits in the head of Homo Sapiens today, Stetka covers an astonishing progression, even tackling future brainy frontiers such as epigenetics and CRISPR. Clearly and expertly told, this intriguing account is the story of who we are. By examining the history of the brain, we can begin to piece together what it truly means to be human.

Bret Stetka is an Editorial Director at Medscape.com—the professional division of WebMD.com. He is a non-practicing physician, and a freelance health and science journalist for a variety of print and online publications. He is a graduate of the University of Virginia School of Medicine. In 2006, he completed a research and science writing post-doctoral year at Mount Sinai School of Medicine in New York City, where he worked in a biological psychiatry laboratory and authored a number of scientific papers published in peer-reviewed journals. He is now a regular contributor to NPR as well as Scientific American Magazine, where he writes about neuroscience, psychiatry, and evolution. His work has also appeared in WIRED and Men’s Journal, as well as Slate, Popular Mechanics, and The Atlantic.

Drew Ramsey, MD is a psychiatrist, author, and farmer. His work focuses on clinical excellence, nutritional interventions and creative media. He is an assistant clinical professor of psychiatry at Columbia University College of Physicians and Surgeons and in active telemedicine clinical practice based in New York City.

His work has been featured by The New York Times, The Wall Street Journal, Lancet Psychiatry, The Today Show, BBC, and NPR and he has given three TEDx talks. He is the co-author of the Antidepressant Food Scale and his e-courses on Nutritional Psychiatry education for the public and clinicians. His books Eat to Beat Depression and Anxiety (Harperwave 2021), Eat Complete, 50 Shades of Kale, and The Happiness Diet explore the connections between mental health and nutrition. He is on the Advisory Board at Men's Health, the Editorial Board at Medscape Psychiatry, and is a member of the Well+Good Wellness Council.

He splits his time between New York City and Crawford County, Indiana where he lives with his wife and children on their organic farm and forest.

A History of the Human Brain: From the Sea Sponge to CRISPR, How Our Brain Evolved (Hardcover)