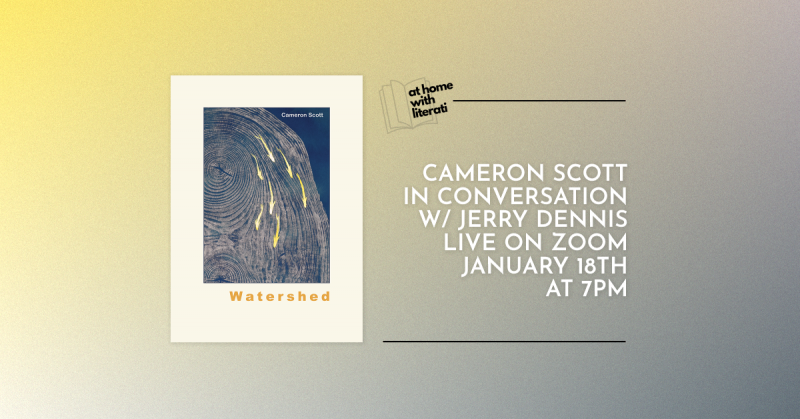 We're pleased to welcome Cameron Scott to our At Home with Literati virtual event series for an event in support of Watershed. He'll be in conversation Jerry Dennis.

Born in Colorado, Cameron Scott has knocked around the dusty and not so dusty West, holds an MFA in poetry from the University of Arizona, teaches 7th-12th grade English Language Arts in Wallowa, OR, and spends his summers as a fly-fishing guide. His lyrical essays and poems have appeared in magazines, journals, and periodicals, most recently in the Fly Fishing & Tying Journal, Swing the Fly, The Flyfish Journal, and Tail Fly Fishing Magazine. In 2016 he was awarded the Blue Light Book Award for his second book of poetry, The Book of Cold Mountain. His most recent collection, Watershed, is a collection of poems and prose centered on fly-fishing. He has gratefully received residencies over the years through Colorado Art Ranch, Chiloquin Visions in Progress, Playa, Pentaculum, and Fishtrap.
Jerry Dennis is a native of northern Michigan and has earned his living as an independent writer since 1986. His essays, poems, and short fiction have appeared in more than 100 publications, including The New York Times, Smithsonian, Audubon,  American Way, Gray’s Sporting Journal, PANK, and Michigan Quarterly Review. His books, many of them illustrated by artist Glenn Wolff, are widely acclaimed, have won numerous awards, and have been translated into Chinese, Japanese, German, Portuguese, Czech, and Korean.
Event date:
Monday, January 18, 2021 - 7:00pm
Event address:
Live on your device