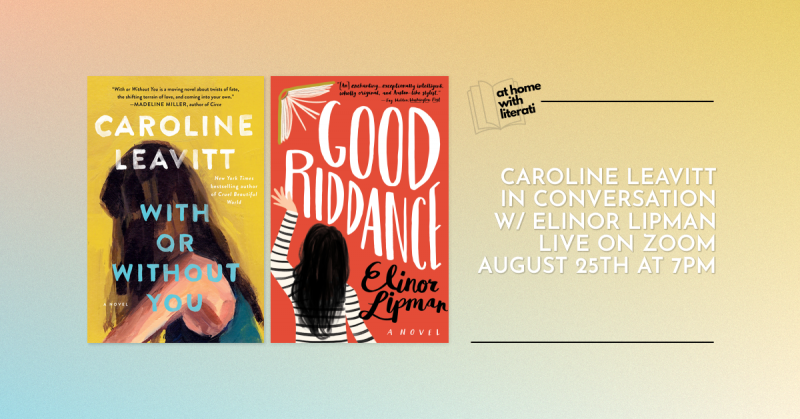 We're pleased to welcome Caroline Leavitt to our At Home with Literati series of virtual events in support of With or Without You. Following a brief reading from the novel, Caroline will be joined in conversation by Elinor Lipman.

About the Book: New York Times bestselling author Caroline Leavitt writes novels that expertly explore the struggles and conflicts that people face in their search for happiness. For the characters in With or Without You, it seems at first that such happiness can come only at someone else's expense. Stella is a nurse who has long suppressed her own needs and desires to nurture the dreams of her partner, Simon, the bass player for a rock band that has started to lose its edge. But when Stella gets unexpectedly ill and falls into a coma just as Simon is preparing to fly with his band to Los Angeles for a gig that could revive his career, Simon must learn the meaning of sacrifice, while Stella's best friend, Libby, a doctor who treats Stella, must also make a difficult choice as the coma wears on.

When Stella at last awakes from her two-month sleep, she emerges into a striking new reality where Simon and Libby have formed an intense bond, and where she discovers that she has acquired a startling artistic talent of her own: the ability to draw portraits of people in which she captures their innermost feelings and desires. Stella's whole identity, but also her role in her relationships, has been scrambled, and she has the chance to form a new life, one she hadn't even realized she wanted.

A story of love, loyalty, loss, and resilience, With or Without You is a page-turner that asks the question, What do we owe the other people in our lives, and when does the cost become too great?

Caroline Leavitt is the award-winning author of twelve novels, including the New York Times bestsellers Pictures of You and Is This Tomorrow. Her essays and stories have been included in New York magazine, Psychology Today, More, Parenting, Redbook, and Salon. She's a book critic for People, the Boston Globe, and the San Francisco Chronicle, and she teaches writing online at Stanford and UCLA.

Elinor Lipman is the award-winning author of eleven novels, including The View from Penthouse B and The Inn at Lake Devine; one essay collection, I Can't Complain; and Tweet Land of Liberty: Irreverent Rhymes from the Political Circus. She currently lives in New York City.

With or Without You: A Novel (Hardcover)

Is This Tomorrow: A Novel (Paperback)

Pictures of You (Paperback)

The View From Penthouse B (Paperback)