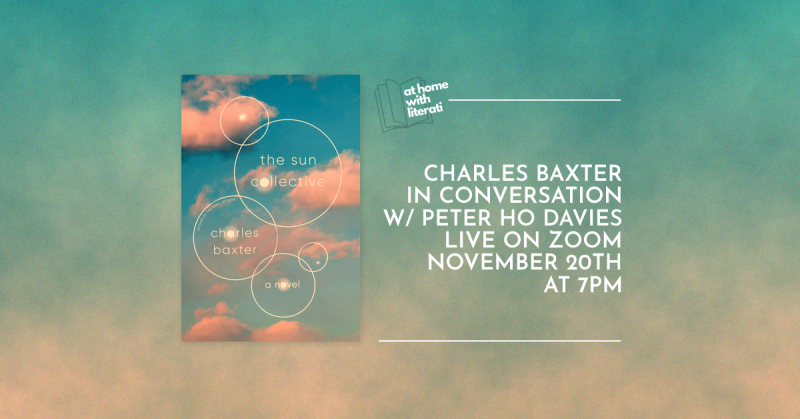 We're pleased to welcome Charles Baxter to our At Home with Literati series of virtual events in support his new novel The Sun Collective. He'll be in conversation with author Peter Ho Davies.

From the National Book Award finalist and "one of our most gifted writers" (Chicago Tribune)--a timely and unsettling novel about the people drawn to and unmoored by a local activist group more dangerous than it appears.

Once a promising actor, Tim Brettigan has gone missing. His father thinks he may have seen him among some homeless people. And though she knows he left on purpose, his mother has been searching for him all over the city. She checks the usual places--churches, storefronts, benches--and stum­bles upon a local community group with lofty goals and an enigmatic leader who will alter all of their lives. Christina, a young woman rapidly becoming addicted to a boutique drug that gives her a feeling of blessedness, is inexplicably drawn to the same collective by a man who's convinced he may start a revolution. As the lives of these four characters intertwine, a story of guilt, anxiety, and feverish hope unfolds in the city of Minneapolis.

A vision of modern American society and the specters of the consumerism, fanaticism, and fear that haunt it, The Sun Collective captures both the mystery and the violence that punctuate our daily lives.

Charles Baxter is the author of the novels The Feast of Love (nominated for the National Book Award), First Light, Saul and Patsy, Shadow Play, The Soul Thief, and The Sun Collective, and the story collections Believers, Gryphon, Harmony of the World, A Relative Stranger, There's Something I Want You to Do, and Through the Safety Net. His stories have been included in The Best American Short Stories. Baxter lives in Minneapolis and teaches at the University of Minnesota and in the MFA Program for Writers at Warren Wilson College.

Peter Ho Davies' novel, The Fortunes, won the Anisfield-Wolf Award and the Chautauqua Prize and was a New York Times Notable Book of the Year. He is also the author of The Welsh Girl, long-listed for the Man Booker Prize, and a London Times Best Seller, as well as two critically acclaimed collections of short stories. His fiction has appeared in Harpers, The Atlantic, The Paris Review and Granta and been anthologized in Prize Stories: The O. Henry Awards and Best American Short Stories.

The Sun Collective: A Novel (Hardcover)

The Feast of Love: A Novel (Vintage Contemporaries) (Paperback)