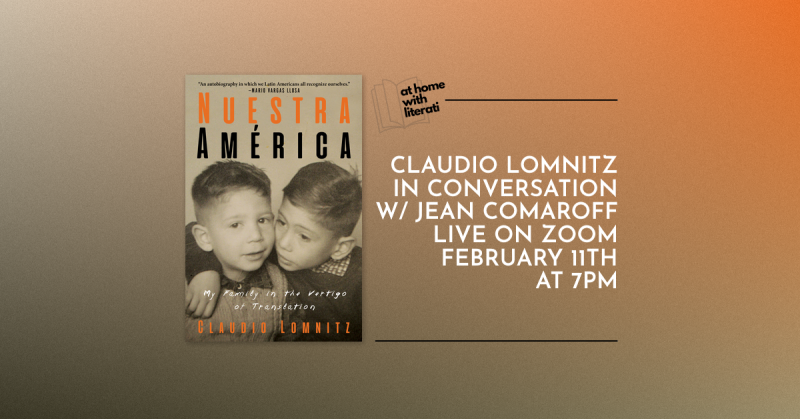 We're pleased to welcome Claudio Lomnitz in support of Nuestra América: My Family in the Vertigo of Translation. He'll be in converation with Jean Comaroff.

About the book: A riveting study of the intersections between Jewish and Latin American culture, this immigrant family memoir recounts history with psychological insight and the immediacy of a thriller.

In Nuestra América, eminent anthropologist and historian Claudio Lomnitz traces his grandparents' exile from Eastern Europe to South America. At the same time, the book is a pretext to explain and analyze the worldview, culture, and spirit of countries such as Peru, Colombia, and Chile, from the perspective of educated Jewish emigrants imbued with the hope and determination typical of those who escaped Europe in the 1920s.

Lomnitz's grandparents, who were both trained to defy ghetto life with the pioneering spirit of the early Zionist movement, became intensely involved in the Peruvian leftist intellectual milieu and its practice of connecting Peru's indigenous past to an emancipatory internationalism that included Jewish culture and thought. After being thrown into prison supposedly for their socialist leanings, Lomnitz's grandparents were exiled to Colombia, where they were subject to its scandals, its class system, its political life. Through this lens, Lomnitz explores the almost negligible attention and esteem that South America holds in US public opinion. The story then continues to Chile during World War II, Israel in the 1950s, and finally to Claudio's youth, living with his parents in Berkeley, California, and Mexico City.

Claudio Lomnitz is an anthropologist, historian, and critic who works broadly on Latin American culture and politics. He is Professor of Anthropology at Columbia University. Lomnitz's books include Death and the Idea of Mexico and The Return of Comrade Ricardo Flores Magón, among many others. As a regular columnist in the Mexico City paper La Jornada and an award-winning dramaturgist, he is committed to bringing historical and anthropological understanding into public debate.

Jean Comaroff is the Alfred North Whitehead Professor of African and African American Studies and Anthropology at Harvard University, and Honorary Professor atthe University of Cape Town. Educated at the University of Cape Town and the London School of Economics, she was formerly the Bernard E. and Ellen C. SunnyDistinguished Service Professor of Anthropology, and Director of the Chicago Centerfor Contemporary Theory at the University of Chicago. Her research, primarily conducted in southern Africa, has focused on the interplay of capitalism, modernity, and colonialism, and on theorizing the contemporary world from beyond its hegemonic centers. Her writing has covered a range of more specific topics: religion and medicine, magic and materiality, law and crime, democracy and difference. Publications include:  (1985), “Beyond the Politics of Bare Life: AIDS and the Global Order” (2007); and“Populism and Late Liberalism: A Special Affinity?” (2011). Also, with John L. Comaroff, Of Revelation and Revolution (vols. l [1991] and ll [1997]); Ethnography and theHistorical Imagination (1992); Millennial Capitalism and the Culture of Neoliberalism (2000), Law and Disorder in the Postcolony (2006), Ethnicity, Inc. (2009),Theory from the South, or How Euro-America is Evolving Toward Africa (2011), The Truth About Crime: Sovereignty, Knowledge, Social Order (2016) The Politics of Custom: Chiefship,Capital, and the State in Contemporary Africa (2018), and (with G.P.Meiu) Ethnicity,Commodity, In/Corporation (2020)

Nuestra América: My Family in the Vertigo of Translation (Hardcover)