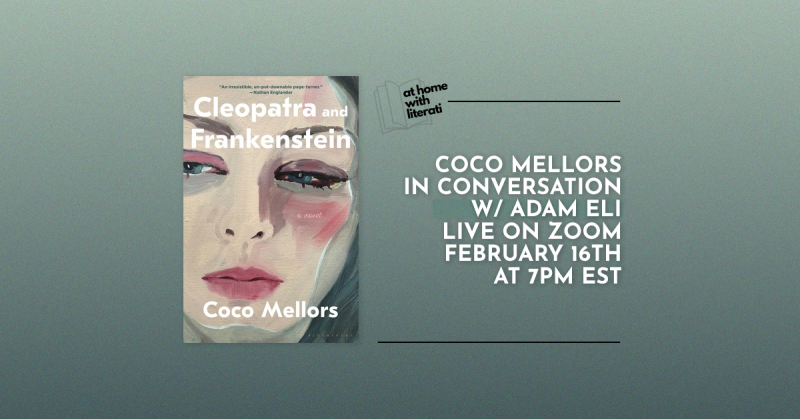 We're pleased to welcome Coco Mellors to our At Home with Literati Series in support of Cleopatra and Frankenstein. She'll be joined in conversation by Adam Eli.

Click here to join the webinar event on 2/16. No pre-registration required!

For readers of Modern Lovers and Conversations with Friends, an addictive, humorous, and poignant debut novel about the shock waves caused by one couple's impulsive marriage.

Twenty-four-year-old British painter Cleo has escaped from England to New York and is still finding her place in the sleepless city when, a few months before her student visa ends, she meets Frank. Twenty years older and a self-made success, Frank's life is full of all the excesses Cleo's lacks. He offers her the chance to be happy, the freedom to paint, and the opportunity to apply for a Green Card. But their impulsive marriage irreversibly changes both their lives, and the lives of those close to them, in ways they never could've predicted.

Each compulsively readable chapter explores the lives of Cleo, Frank, and an unforgettable cast of their closest friends and family as they grow up and grow older. Whether it's Cleo's best friend struggling to embrace his gender queerness in the wake of Cleo's marriage, or Frank's financially dependent sister arranging sugar daddy dates to support herself after being cut off, or Cleo and Frank themselves as they discover the trials of marriage and mental illness, each character is as absorbing, and painfully relatable, as the last.

As hilarious as it is heartbreaking, entertaining as it is deeply moving, Cleopatra and Frankenstein marks the entry of a brilliant and bold new talent.

Coco Mellors grew up in London and New York. She has an MFA from New York University, where she was a recipient of the Goldwater Fellowship. She currently lives in Los Angeles, California with her husband.

Adam Eli is a community organizer and author based in New York City. His first book, The New Queer Conscience, was published on June 2nd, 2020 by Penguin Teen. He is the founder of international activist group Voices4 and the editor-in-chief of a zine about global gender equality produced by Gucci and Chime for Change. He was named one of the 100 most influential queer people in the world by OUT Magazine and firmly believes that queer people anywhere are responsible for queer people everywhere.