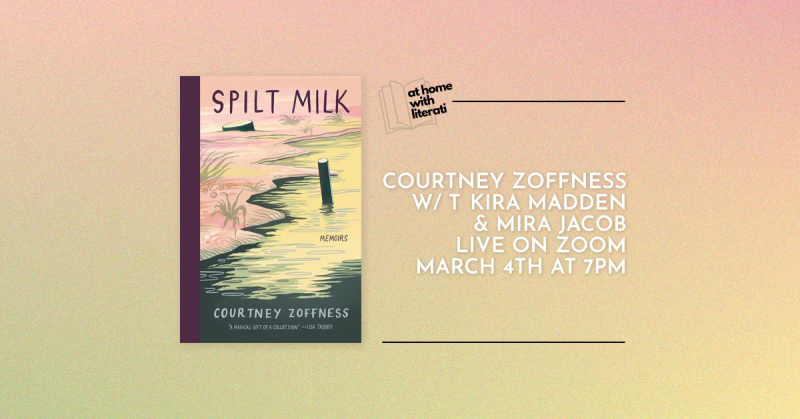 We're pleased to welcome Courtney Zoffness to our At Home with Literati Series in support of Spilt Milk. She'll be joined by authors T. Kira Madden and Mira Jacob.

About Spilt Milk: What role does a mother play in raising thoughtful, generous children? In her literary debut, internationally award-winning writer Courtney Zoffness considers what we inherit from generations past--biologically, culturally, spiritually--and what we pass on to our children. Spilt Milk is an intimate, bracing, and beautiful exploration of vulnerability and culpability. Zoffness relives her childhood anxiety disorder as she witnesses it manifest in her firstborn; endures brazen sexual advances by a student in her class; grapples with the implications of her young son's cop obsession; and challenges her Jewish faith. Where is the line between privacy and secrecy? How do the stories we tell inform who we become? These powerful, dynamic essays herald a vital new voice.

Courtney Zoffness won the 2018 Sunday Times Short Story Award, the most valuable international prize for short fiction, amid entries from 38 countries. She joins a winners list that includes Junot Díaz, Anthony Doerr, and Yiyun Li. Other honors include an Emerging Writer Fellowship from the Center for Fiction, the Arts & Letters Creative Nonfiction Prize, a Bread Loaf Writers Conference scholarship, and two residency fellowships from MacDowell. Her writing has appeared in various journals and anthologies, including the Paris Review Daily, Longreads, The Southern Review, The Rumpus, and No Tokens, she had Notable essays in Best American Essays 2018 & 2019. Her literary debut, Spilt Milk, is out from McSweeney's March 2021. Courtney holds graduate degrees from Johns Hopkins University and the University of Arizona, and a B.A. from the University of Pennsylvania. She has taught at nearly a dozen institutions, including Yale University and the University of Freiburg (Germany). Currently she directs the Creative Writing Program at Drew University and is a faculty member at Writing Workshops in Greece. She lives with her family in Brooklyn, New York.

T Kira Mahealani Madden is a lesbian APIA writer, photographer, and amateur magician living in Hudson Valley, New York. She holds an MFA in creative writing from Sarah Lawrence College and an BA in design and literature from Parsons School of Design and Eugene Lang College. She is the founding Editor-in-chief of No Tokens, a magazine of literature and art, and is a 2017 NYSCA/NYFA Artist Fellow in nonfiction literature from the New York Foundation for the Arts. She has received fellowships from MacDowell, Hedgebrook, Tin House, DISQUIET, Summer Literary Seminars, and Yaddo, where she was selected for the 2017 Linda Collins Endowed Residency Award. She facilitates writing workshops for homeless and formerly incarcerated individuals and currently teaches in the MFA program at Sarah Lawrence College. Her debut memoir, LONG LIVE THE TRIBE OF FATHERLESS GIRLS, was a New York Times Editors' Choice selection, a finalist for the National Book Critics Circle John Leonard Prize, and a finalist for the LAMBDA Literary Award for lesbian memoir. There is no period in her name.

Mira Jacob is a novelist, memoirist, illustrator, and cultural critic. Her graphic memoir Good Talk: A Memoir in Conversations was shortlisted for the National Book Critics Circle Award, longlisted for the PEN Open Book Award,  named a New York Times Notable Book, as well as a best book of the year by Time, Esquire, Publisher’s Weekly, and Library Journal. It is currently in development as a television series with Film 44. Her novel The Sleepwalker’s Guide to Dancing was a Barnes & Noble Discover New Writers pick, shortlisted for India’s Tata First Literature Award,  longlisted for the Brooklyn Literary Eagles Prize and named one of the best books of 2014 by Kirkus Reviews, the Boston Globe, Goodreads, Bustle, and The Millions. Her work has appeared in The New York Times Book Review, Electric Literature, Tin House, Literary Hub, Guernica, Vogue, and the Telegraph.  She is currently the visiting professor at MFA Creative Writing  program at The New School, and a founding faculty member of the MFA Program at Randolph College. She is the co-founder of Pete’s Reading Series in Brooklyn, where she spent 13 years bringing literary fiction, non-fiction, and poetry to Williamsburg.She lives in Brooklyn with her husband, documentary filmmaker Jed Rothstein, and their son.

Long Live the Tribe of Fatherless Girls: A Memoir (Paperback)