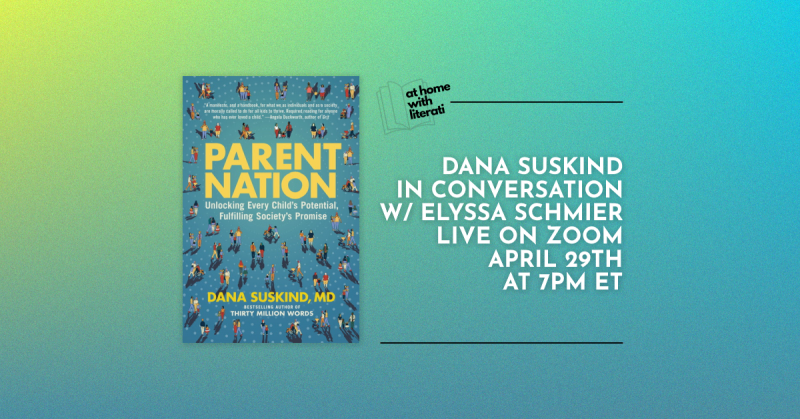 We're pleased to welcome Dana Suskind to our At Home with Literati Series in support of Parent Nation. She will be joined in conversation by Elyssa Schmier of MomsRising.

Click here to join the webinar event on 4/29. No pre-registration required!

World-class pediatric surgeon, social scientist, and best-selling author of Thirty Million Words Dr. Dana Suskind returns with a revelatory new look at the neuroscience of early childhood development--and how it can guide us toward a future in which every child has the opportunity to fulfill their potential.

Her prescription for this more prosperous and equitable future, as clear as it is powerful, is more robust support for parents during the most critical years of their children's development. In her poignant new book, Parent Nation, written with award-winning science writer Lydia Denworth, Dr. Suskind helps parents recognize both their collective identity and their formidable power as custodians of our next generation.

Weaving together the latest science on the developing brain with heart-breaking and relatable stories of families from all walks of life, Dr. Suskind shows that the status quo--scores of parents convinced they should be able to shoulder the enormous responsibility of early childhood care and education on their own--is not only unsustainable, but deeply detrimental to the wellbeing of children, families, and society.

Anyone looking for a blueprint for how to build a brighter future for our children will find one in Parent Nation. Informed by the science of foundational brain development as well as history, political science, and the lived experiences of families around the country, this book clearly outlines how society can and should help families meet the developmental needs of their children. Only then can we ensure that all children are able to enjoy the promise of their potential.

Dana Suskind, MD, is founder and co-director of the TMW Center for Early Learning + Public Health, director of the Pediatric Cochlear Implant Program, and professor of Surgery and Pediatrics at the University of Chicago. Dr. Suskind is the author of over forty-five scientific publications and Thirty Million Words: Building a Child's Brain. She is a member of the American Academic of Pediatrics and a fellow for the Council on Early Childhood. Her work has been profiled by numerous media outlets, including The New York Times, The Economist, Forbes, NPR, and Freakonomics.

Elyssa Schmier is the Vice President of Government Relations and National Budget for MomsRising. Her career has been focused on legislative and policy work in the field of poverty policy. She previously served as the Deputy Policy Director for the Jewish Council of Public Affairs and as a Legislative Representative for the Association of Community Organizations for Reform Now.  Elyssa has also worked in Senator Edward Kennedy’s Office, as well as Representative John Tierney’s office. She received her bachelor’s degree from Hobart and William Smith Colleges and her master’s degree in government at Johns Hopkins University. Originally from Swampscott, MA, Elyssa now resides in Huntington Woods, MI with her husband, son, and corgi.