At Home with Literati: Daniel Hornsby and Mairead Small Staid 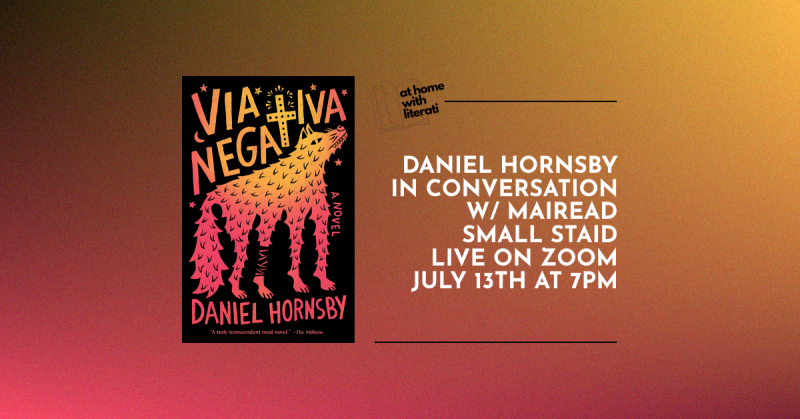 We're pleased to welcome Daniel Hornsby to our At Home with Literati Series in support of Via Negativa. He'll be joined in conversation by writer and former Literati bookseller Mairead Small Staid.

About the boo: A heartfelt, daring, divinely hilarious debut novel about a priest who embarks on a fateful journey with a pistol in his pocket and an injured coyote in his backseat.

"A beautiful and meditative exploration of shattered faith." --Brit Bennett, author of The Vanishing Half

Father Dan is homeless. Dismissed by his conservative diocese for eccentricity and insubordination, he's made his exile into a kind of pilgrimage, transforming his Toyota Camry into a mobile monk's cell. Then he sees a minivan sideswipe a coyote. Unable to suppress his Franciscan impulses, he takes the injured animal in.

With his unexpected canine companion in the backseat, Dan makes his way west, encountering other offbeat travelers and stopping to take in the occasional roadside novelty (MARTIN'S HOLE TO HELL, WORLD-FAMOUS BOTTOMLESS PIT NEXT EXIT ). But the coyote is far from the only oddity fate has delivered into this churchless priest's care: it has also given him a bone-handled pistol, a box of bullets, and a letter from an estranged friend. By the time Dan gets to where he's going, he'll be forced to reckon once and for all with the great mistakes of his past, and he will have to decide: is penance better paid with revenge, or with redemption?

Daniel Hornsby was born in Muncie, Indiana. He holds an MFA in fiction from the University of Michigan, and an MTS from Harvard Divinity School. His stories and essays have appeared in the Los Angeles Review of Books, Electric Literature, The Missouri Review, and Joyland. He lives in Memphis, Tennessee.

Mairead Small Staid is a graduate of the Helen Zell Writers' Program at the University of Michigan, where she won Hopwood Awards in nonfiction and poetry. She has received fellowships from MacDowell, the Minnesota State Arts Board, and Phillips Exeter Academy, and her recent work can be found in The Paris Review, The Yale Review, POETRY, and AGNI. Her first book, The Traces, will be published by A Strange Object in 2022.
Event date:
Tuesday, July 13, 2021 - 7:00pm
Event address:
Live on your device