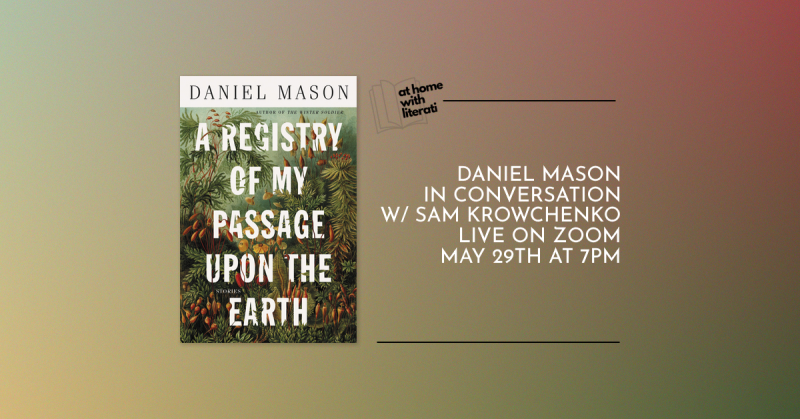 We're pleased to welcome Daniel Mason, author of A Registry of My Passage Upon The Earth, to our At Home with Literati series! He'll be in conversation with Literati bookseller Sam Krowchenko.

About the book: "Nine tales of human endurance, accomplishment, and epiphany told with style and brio" (Kirkus) from the bestselling, award-winning author of The Winter Soldier and The Piano Tuner.

On a fateful flight, a balloonist makes a discovery that changes her life forever. A telegraph operator finds an unexpected companion in the middle of the Amazon. A doctor is beset by seizures, in which he is possessed by a second, perhaps better, version of himself. And in Regency London, a bare-knuckle fighter prepares to face his most fearsome opponent, while a young mother seeks a miraculous cure for her ailing son.

At times funny and irreverent, always moving and deeply urgent, these stories — among them a National Magazine Award and a Pushcart Prize winner — cap a fifteen-year project. From the Nile’s depths to the highest reaches of the atmosphere, from volcano-racked islands to an asylum on the outskirts of Rio de Janeiro, these are tales of ecstasy, epiphany, and what the New York Times Magazine called the “struggle for survival . . . hand to hand, word to word,” by “one of the finest prose stylists in American fiction.”

Daniel Mason is a physician and the author of the novels The Piano Tuner, A Far Country, and The Winter Soldier. His work has been translated into twenty-eight languages and adapted for opera and theater. A recipient of a fellowship from the National Endowment for the Arts, he is currently a clinical assistant professor of psychiatry at Stanford University, where he teaches courses in the humanities and medicine.

Sam Krowchenko is the host of Literati Bookstore's podcast Shelf Talking. His work has appeared in Salon, Full Stop, and The Michigan Quarterly Review. He received an MFA in Fiction from the Helen Zell Writers' Program at the University of Michigan.

A Registry of My Passage upon the Earth: Stories (Hardcover)

The Piano Tuner: A Novel (Paperback)