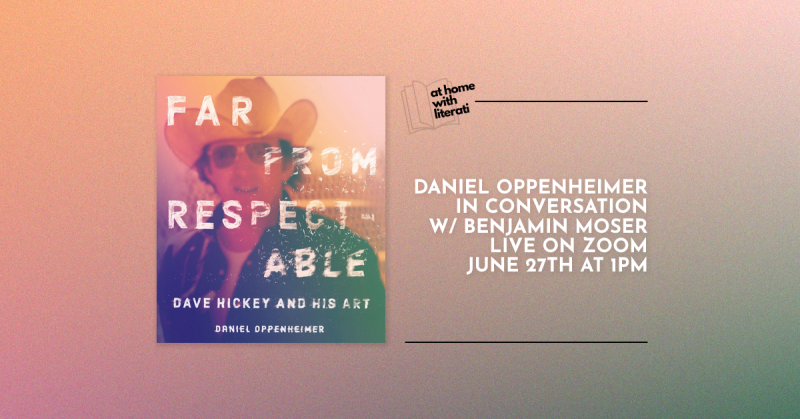 We're pleased to welcome Daniel Oppenheimer to our At Home with Literati Series in support of Far from Respectable: Dave Hickey and His Art. He'll be joined in conversation by author Benjamin Moser​​​​​​​.

Regarded as both a legend and a villain, the critic Dave Hickey has inspired generations of artists, art critics, musicians, and writers. His 1993 book The Invisible Dragon became a cult hit for its potent and provocative critique of the art establishment and its call to reconsider the role of beauty in art. His next book, 1997's Air Guitar, introduced a new kind of cultural criticism--simultaneously insightful, complicated, vulnerable, and down-to-earth--that propelled Hickey to fame as an iconoclastic thinker, loved and loathed in equal measure, whose influence extended beyond the art world. Far from Respectable is a focused, evocative exploration of Hickey's work, his impact on the field of art criticism, and the man himself, from his Huck Finn childhood to his drug-fueled periods as both a New York gallerist and Nashville songwriter to, finally, his anointment as a tenured professor and MacArthur Fellow. Drawing on in-person interviews with Hickey, his friends and family, and art world comrades and critics, Daniel Oppenheimer examines the controversial writer's distinctive takes on a broad range of subjects, including Norman Rockwell, Robert Mapplethorpe, academia, Las Vegas, basketball, country music, and considers how Hickey and his vision of an "ethical, cosmopolitan paganism" built around a generous definition of art is more urgently needed than ever before.

Daniel Oppenheimer is the author of Exit Right: The People Who Left the Left and Reshaped the American Century. He has written for the Washington Post, the Atlantic, Slate, Washington Monthly, Guernica, and The New Republic, among others.

Benjamin Moser was born in Houston. He is the author of Why This World: A Biography of Clarice Lispector, a finalist for the National Book Critics’ Circle Award and a New York Times Notable Book of 2009. For his work bringing Clarice Lispector to international prominence, he received Brazil’s first State Prize for Cultural Diplomacy. He won a Guggenheim Fellowship in 2017, and his latest book, Sontag: Her Life and Work, won the Pulitzer Prize.

Far From Respectable: Dave Hickey and His Art (Hardcover)