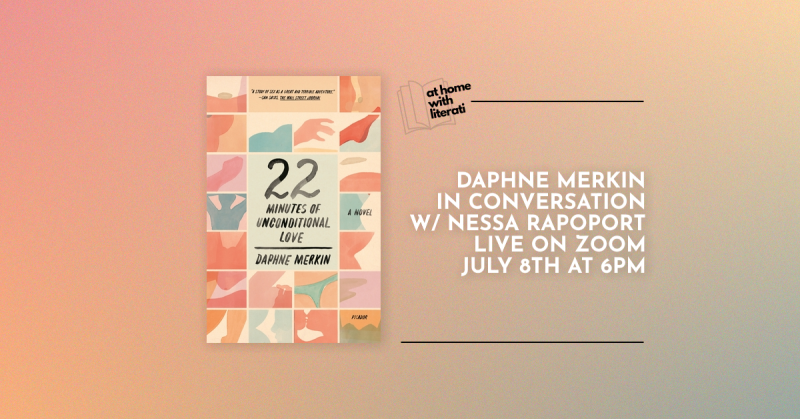 We're pleased to welcome Daphne Merkin to our At Home with Literati Series in support of 22 Minutes of Unconditional Love. She'll be joined in conversation by Nessa Rapoport.

Note: we are now hosting on Zoom webinars, no pre-registration necessary. You will be prompted to enter a first name and email upon joining. You may then see a window reading "waiting for host to start webinar," but sit tight--you will be admitted as soon as we begin broadcasting live! You will be able to submit questions using the Q&A feature.

About the book:  A harrowing, compulsively readable novel about breaking free of sexual obsession

As Daphne Merkin's audacious new novel opens, a wife and mother looks back at the moment when her life as a young book editor is upended by a casual encounter with an intriguing man who seems to intuit her every thought. Convinced she's found the one, Judith Stone succumbs to the push and pull of her sexual entanglement with Howard Rose, constantly seeking his attention and approval. That is, until she realizes that beneath his erotic obsession with her, Howard is intent on obliterating any sense of self she possesses. As Merkin writes, his was "the allure of remoteness, affection edged in ice." Escaping Howard's grasp--and her own perverse enjoyment of being under his control--will test the limits of Judith's capacity to resist the siren call of submission.

Narrated by Judith in a time before the #MeToo movement, 22 Minutes of Unconditional Love charts the persistent hold the past has on us and the way it shapes our present.

Daphne Merkin is the author of five books: two novels, 22 Minutes of Unconditional Love (Farrar, Straus and Giroux, 2020 and Picador, 2021) and Enchantment (Harcourt Brace Jovanovich, 1986), which won the Edward Lewis Wallant Award for the best new work of fiction based on a Jewish theme; it was reprinted by Picador in July 2020 with a foreword by Vivian Gornick. Her memoir, This  Close to Happy: A Reckoning with Depression (Farrar, Straus and Giroux, 2018) received a front-page review in the New York Times Book Review. She has also published two collections of essays: Dreaming of Hitler: Passions & Provocations (1997) and The Fame Lunches: On Wounded Icons, Money, Sex, The Brontes, and the Importance of Handbags, which was named a New York Times Notable Book of 2014.  As a former staff writer for The New Yorker, Merkin's cultural criticism frequently appears in The New York Times Book Review & Magazine, The Wall Street Journal, Bookforum, New York Review of Books, The New Republic, Departures, Elle, Travel + Leisure, Tablet, and many other publications. Merkin has taught writing at the 92nd Street Y, Marymount Manhattan College, Hunter College and Columbia University’s MFA program. She lives in New York City and gives private writing classes.
Nessa Rapoport is the author of two novels, Evening, published in fall 2020, and Preparing for Sabbath; and a collection of prose poems, A Woman’s Book of Grieving. Her essays and stories have appeared in The New York Times and the Los Angeles Times, and have been widely anthologized. She was awarded a grant by the Canada Council for the Arts for her memoir of family and place, House on the River.
Event date:
Thursday, July 8, 2021 - 6:00pm
Event address:
Live on your device

This Close to Happy: A Reckoning with Depression (Paperback)