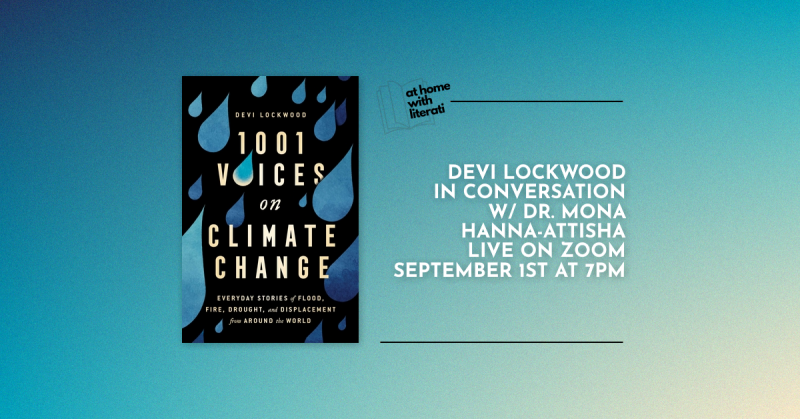 We're pleased to welcome Devi Lockwood to our At Home with Literati Series in support of 1,001 Voices on Climate Change. She'll be joined in conversation by Dr. Mona Hanna-Attisha.

Click here to join the webinar event on 9/1. No pre-registration required!

Join journalist Devi Lockwood as she bikes around the world collecting personal stories about how flood, fire, drought, and rising seas are changing communities.

It's official: 2020 will be remembered as the year when apocalyptic climate predictions finally came true. Catastrophic wildfires, relentless hurricanes, melting permafrost, and coastal flooding have given us a taste of what some communities have already been living with for far too long. Yet we don't often hear the voices of the people most affected. Journalist Devi Lockwood set out to change that.

In 1,001 Voices on Climate Change, Lockwood travels the world, often by bicycle, collecting first-person accounts of climate change. She frequently carried with her a simple cardboard sign reading, "Tell me a story about climate change."

Over five years, covering twenty countries across six continents, Lockwood hears from indigenous elders and youth in Fiji and Tuvalu about drought and disappearing coastlines, attends the UN climate conference in Morocco, and bikes the length of New Zealand and Australia, interviewing the people she meets about retreating glaciers, contaminated rivers, and wildfires. She rides through Thailand, Laos, and Cambodia to listen to marionette puppeteers and novice Buddhist monks.

From Denmark and Sweden to China, Turkey, the Canadian Arctic, and the Peruvian Amazon, she finds that ordinary people sharing their stories does far more to advance understanding and empathy than even the most alarming statistics and studies. This book is a hopeful global listening tour for climate change, channeling the urgency of those who have already glimpsed the future to help us avoid the worst.

Devi Lockwood has written about science, climate change, and technology for The New York Times, The Guardian, Slate, and The Washington Post, among others. She spent five years traveling in twenty countries on six continents to document 1,001 stories on water and climate change, funded in part by the Gardner & Shaw postgraduate traveling fellowships from Harvard and a National Geographic Early Career Grant. Lockwood graduated Phi Beta Kappa, summa cum laude from Harvard, where she studied Folklore and Mythology and earned a Language Citation in Arabic. In 2019, she completed an MS in Science Writing at MIT. She is an editor for Rest of World and splits her time between New York and Vermont.

Mona Hanna-Attisha, MD, MPH, FAAP, is a physician, scientist, and activist who has been called to testify twice before the United States Congress, awarded the Freedom of Expression Courage Award by PEN America, and named one of Time magazine's 100 Most Influential People in the World.
Event address:
Live on your device
Books:

1,001 Voices on Climate Change: Everyday Stories of Flood, Fire, Drought, and Displacement from Around the World (Hardcover)

What the Eyes Don't See: A Story of Crisis, Resistance, and Hope in an American City (Paperback)