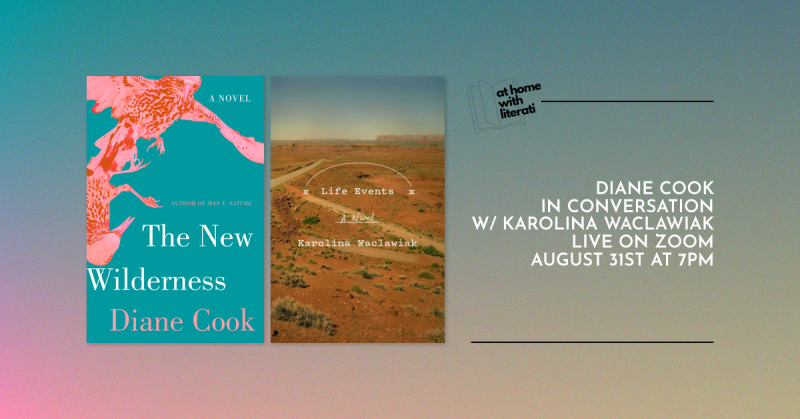 We're pleased to welcome Diane Cook and Karolina Waclawiak to our At Home with Literati series for a joint reading and conversation in support of their new titles.

Bea's five-year-old daughter, Agnes, is slowly wasting away, consumed by the smog and pollution of the overdeveloped metropolis that most of the population now calls home. If they stay in the city, Agnes will die. There is only one alternative: the Wilderness State, the last swath of untouched, protected land, where people have always been forbidden. Until now.

Bea, Agnes, and eighteen others volunteer to live in the Wilderness State, guinea pigs in an experiment to see if humans can exist in nature without destroying it. Living as nomadic hunter-gatherers, they slowly and painfully learn to survive in an unpredictable, dangerous land, bickering and battling for power and control as they betray and save one another.

But as Agnes embraces the wild freedom of this new existence, Bea realizes that saving her daughter's life means losing her in a different way. The farther they get from civilization, the more their bond is tested in astonishing and heartbreaking ways.

At once a blazing lament of our contempt for nature and a deeply humane portrayal of motherhood and what it means to be human, The New Wilderness is an extraordinary novel from a one-of-a-kind literary force.

Diane Cook is the author of the story collection Man V. Nature, which was a finalist for the Guardian First Book Award, The Believer Book Award, and the Los Angeles Times Award for First Fiction. Her stories have appeared in Harper’s, Tin House, Granta, and in Best American Short Stories and The O. Henry Prize Stories. She received a 2016 fellowship from the National Endowment for the Arts. The New Wilderness is her first novel.

Karolina Waclawiak's breakout novel, Life Events, follows Evelyn, who, at thirty-seven, is on the verge of divorce and anxiously dreading the death of everyone she loves. She combats her existential crisis by avoiding her husband and aimlessly driving along the freeways of California looking for an escape--one that eventually comes when she discovers a collective of "exit guides." Evelyn enrolls in their training course, where she learns to provide companionship and a final exit for terminally ill patients seeking a conscious departure.

Sensitively observed and darkly funny, Life Events is a moving, enlivening story of the human condition: the doldrums of loneliness, the consuming regret of past mistakes, and the thrill, finally, of finding meaning--and love--where you least expect it.

Karolina Waclawiak is the author of the novels How to Get into the Twin Palms and The Invaders. Formerly an editor at The Believer, she is the executive editor of culture at BuzzFeed News. Her writing has appeared in The New York Times, Los Angeles Times, The Virginia Quarterly Review, Hazlitt, and elsewhere. Her most recent novel, Life Events, came out in July of 2020.