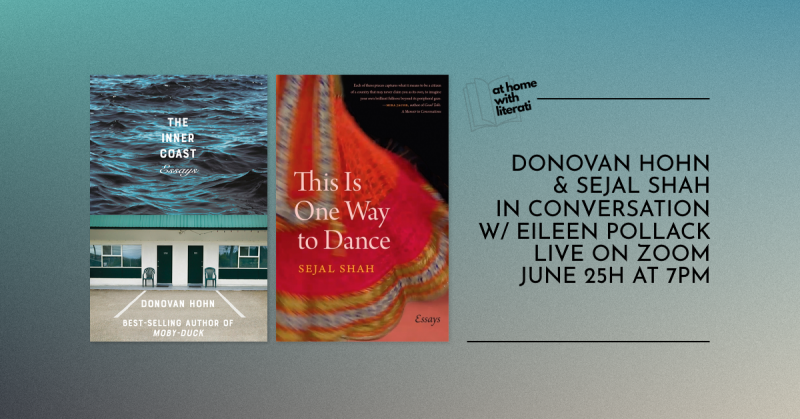 We're pleased to welcome Donovan Hohn and Sejal Shah to our At Home with Literati series for a conversation with author Eileen Pollack.

Note: Sejal Shah's This Is One Way to Dance is currently out of stock at our distributor, we will update this page when this title returns to their inventory so that you may order it through Literati.

About The Inner Coast: Writing in the grand American tradition of Annie Dillard and Barry Lopez, Donovan Hohn is an “adventurous, inquisitive, and brightly illuminating writer” (New York Times). Since the publication of Moby-Duck a decade ago, Hohn has been widely hailed for his prize-winning essays on the borderlands between the natural and the human. The Inner Coast collects ten of his best, many of them originally published in such magazines as the New York Times Magazine and Harper’s, which feature his physical, historical, and emotional journeys through the American landscape.

About This Is One Way to Dance: A meditation on culture, language, family, and place, This Is One Way To Dance is striking in its observations. Shah’s writing is fluid, evolving, questioning always the personal, cultural and geographic distances and movements between people—imagined, real, and changing. In essays written between 1999 and 2019, Sejal Shah, the daughter of Gujarati parents from India and Kenya, explores the tension of being both invisible and hyper-visible, growing up South Asian in the United States. In a memoir of linked essays that spans 20 years, Shah writes of coming of age in and returning to western New York State, a place of extreme racial and socioeconomic segregation. For decades, Asian Americans were nearly invisible in the public spheres of politics, arts, media, and entertainment. Shah muses on how to keep marginalization from colonizing your mind, how to keep moving (dancing, even) through depression, the death of loved ones, and the ongoing search for love and home.

Donovan Hohn is the author of Moby-Duck: The True Story of 28,800 Bath Toys Lost at Sea, a New York Times Notable Book and runner-up for both the PEN/John Kenneth Galbraith Award for Nonfiction and the PEN/E. O. Wilson Literary Science Writing Award. His essays have appeared in such publications as Harper's, The New York Times Magazine, The Virginia Quarterly Review, Lapham's Quarterly, and The New Republic. A recipient of the Whiting Writer’s Award and an NEA Creative Writing Fellowship, Hohn spent a number of years editing essays, fiction, and literary journalism at Harper’s, and a few years as features editor of GQ. He has taught nonfiction in the MFA program of the University of Michigan and is now on the creative writing faculty of Wayne State University in Detroit. His second book, The Inner Coast: Essays, will be published by W. W. Norton in 2020.

Sejal Shah is the author of the debut essay collection, This Is One Way to Dance (University of Georgia Press, 2020). Her stories and essays have appeared or are forthcoming in Brevity, Conjunctions, Guernica, the Kenyon Review Online, Literary Hub, Longreads, and The Rumpus. The recipient of a 2018 NYFA fellowship in fiction, Sejal recently completed a story collection and is at work on a memoir about mental health and academia. She is on the faculty of the Rainier Writing Workshop low-residency MFA program at Pacific Lutheran University. She lives in Rochester, New York.

Eileen Pollack graduated with a BS in physics from Yale and earned an MFA in creative writing from the University of Iowa. She is the author of the novels The Professor of Immortality, The Bible of Dirty Jokes, A Perfect Life, and Breaking and Entering, the short-story collections In the Mouth and The Rabbi in the Attic, and the nonfiction books The Only Woman in the Room: Why Science Is Still a Boys’ Club and Woman Walking Ahead: In Search of Catherine Weldon and Sitting Bull. She has received fellowships from the National Endowment for the Arts, the Michener Foundation, the Rona Jaffe Foundation, and the Massachusetts Arts Council. Her novella "The Bris" was chosen to appear in Best American Short Stories, edited by Stephen King; two other stories have been awarded Pushcart Prizes, and her essay "Pigeons" was selected by Cheryl Strayed for Best American Essays. Formerly the director of the MFA Program in Creative Writing at the University of Michigan, she now lives in New York City.

This Is One Way to Dance: Essays (Paperback)

Moby-Duck: The True Story of 28,800 Bath Toys Lost at Sea & of the Beachcombers, Oceanograp hers, Environmentalists & Fools Including the Author Who Went in Search of Them (Paperback)

The Professor of Immortality (Hardcover)

The Only Woman in the Room: Why Science Is Still a Boys' Club (Paperback)

The Bible of Dirty Jokes (Paperback)

A Perfect Life: A Novel (Paperback)