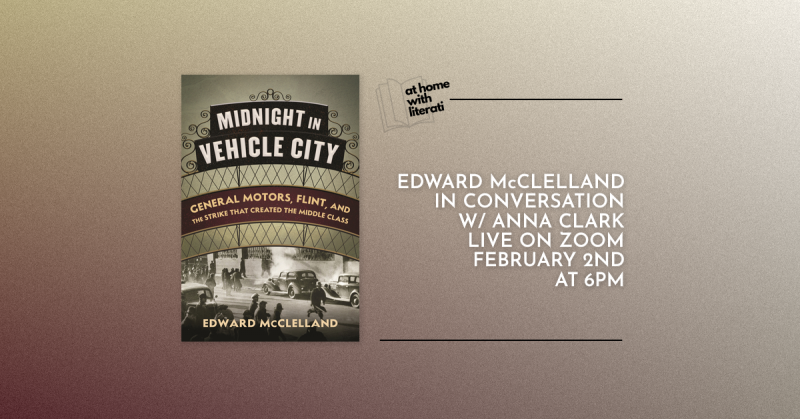 We're pleased to welcome Edward McClelland in support of Midnight in Vehicle City. He'll be joined in conversation by author Anna Clark.

About the book: In a time of great inequality and a gutted middle class, the dramatic story of the strike heard around the world is a testament to what workers can gain when they stand up for their rights.

The tumultuous Flint sit-down strike of 1936-1937 was the birth of the United Auto Workers, which set the standard for wages in every industry. Midnight in Vehicle City tells the gripping story of how workers defeated General Motors, the largest industrial corporation in the world. Their victory ushered in the golden age of the 9781250181619 American middle class and created a new kind of America, one in which every worker had a right to a share of the company's wealth. The causes for which the strikers sat down--collective bargaining, secure retirement, better wages--enjoyed a half century of success. But now, the middle class is disappearing and economic inequality is at its highest since before the New Deal.

Journalist and historian Edward McClelland brings the action-packed events of the strike back to life--through the voices of those who lived it. In vivid play-by-plays, McClelland narrates the dramatic scenes including of the takeovers of GM plants; violent showdowns between picketers and the police; Michigan governor Frank Murphy's activation of the National Guard; the actions of the militaristic Women's Emergency Brigade who carried billy clubs and vowed to protect strikers from police; and tense negotiations between labor leader John L. Lewis, GM chairman Alfred P. Sloan, and labor secretary Frances Perkins.

The epic tale of the strike and its lasting legacy shows why the middle class is one of the greatest inventions of the 20th century and will guide our understanding of what we will lose if we don't revive it.

Edward McClelland is a journalist, a historian, and an author born and raised in Lansing, Michigan. His work has been published in numerous places, including the New York Times, Washington Post, and the Chicago Reader, and on Salon and Slate. He is the author of several books, including Young Mr. Obama: Chicago and the Making of a Black President, Nothin' but Blue Skies: The Heyday, Hard Times and Hopes of America's Industrial Heartland, and How to Speak Midwestern. Connect with him online at edwardmcclelland.com and @TedMcClelland on Twitter.
Anna Clark is a journalist living in Detroit. Her writing has appeared in ELLE Magazine, The New York Times, The Washington Post, Politico, the Columbia Journalism Review, Next City, and other publications. Anna edited A Detroit Anthology, a Michigan Notable Book, and she had been a writer-in-residence in Detroit public schools as part of the InsideOut Literary Arts program. She has also been a Fulbright fellow in Nairobi, Kenya, and a Knight-Wallace journalism fellow at the University of Michigan. Her books include The Poisoned City and Literary Luminaries.
Event date:
Tuesday, February 2, 2021 - 6:00pm
Event address:
Live on your device

Midnight in Vehicle City: General Motors, Flint, and the Strike That Created the Middle Class (Hardcover)