At Home with Literati: Eliza Nellums 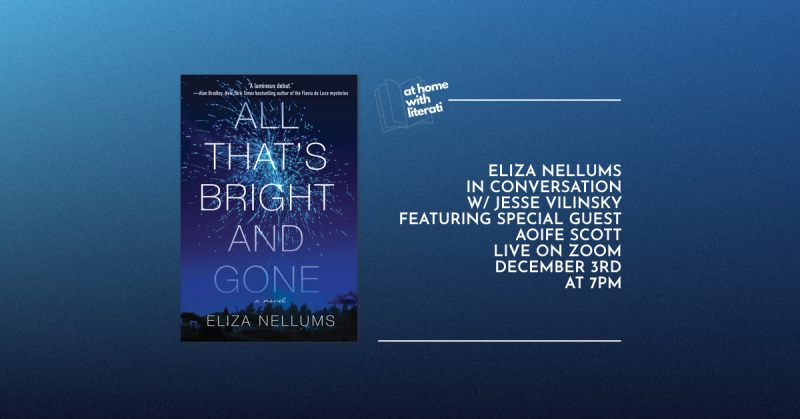 We're pleased to welcome Eliza Nellums to our At Home with Literati series in support of All That's Bright and Gone. She'll be joined in conversation by the audiobook version's narrator, Jesse Vilinksy! And a special appearance by musical guest Aoife Scott.

About the book: There's plenty about the grownup world that six-year-old Aoife doesn't understand. Like what happened to her big brother Theo and why her mama is in the hospital instead of home where she belongs. Uncle Donny says she just needs to be patient, but Aoife's sure her mama won't be able to come home until Aoife learns what really happened to her brother. The trouble is no one wants to talk about Theo because he was murdered. But by whom?

With her imaginary friend Teddy by her side and the detecting skills of her nosy next door neighbor, Aoife sets out to uncover the truth about her family. But as her search takes her from the banks of Theo's secret hideout by the river to the rooftops overlooking Detroit, Aoife will learn that some secrets can't stay hidden forever and sometimes the pain we bury is the biggest secret of them all.

Driven by Aoife's childlike sincerity and colored by her vivid imagination, All That's Bright and Gone illuminates the unshakeable bond between families--and the lengths we'll go to bring our loved ones home.

Eliza Nellums is a member of the Metro Wriders and has a Masters degree from the University of Michigan. Raised in the Detroit suburbs, Elizabeth now lives with her cat in Washington, DC where she is the manager of a grants program. Her short story Changelings was published in the anthology Magical. All That's Bright and Gone is her debut novel.
Event date:
Thursday, December 3, 2020 - 7:00pm
Event address:
Live on your device

All That's Bright and Gone: A Novel (Paperback)